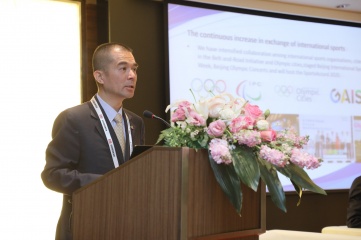 The second Host City Asia conference brought more than 120 Asian and international event hosts, owners and organisers together to exchange opportunities in Beijing on 11 April

Host City Asia kicked off with a series of VIP insights from the hosts of the next three Olympic Games: Tokyo, Beijing and Paris.

The number of cities attending Host City Asia has quadrupled since the launch event, with officials from major Chinese cities including Beijing, Zhangjiakou, Hangzhou, Anshan, Changzhou, Shanxi and Changchun. They were joined by many more hosts destinations from Japan, Australia and Oman to as far away as France, all sharing best practice.

The cities attending were also treated to finding out about how to host new urban events –like Nitro Circus, Red Bull Air Race and the FISE World Series – to esports and the immense AIPH World Horticultural Expo, which is attracting 16 million visitors to Beijing this year. Leading suppliers like Aggreko joined Tokyo 2020, Beijing 2022 and other major event organising committees to examine how they can make event hosting more efficient together.

Xiaochun ZHAO, Director-General of Shanxi Provincial Sports Bureau said “By holding the Second National Youth Games, a socially significant event, we can unite people's hearts, boost morale, promote spiritual civilization and improve the humanistic quality of the people. We can further promote the adjustment of industrial structure in the province.”

Hiromi KAWAMURA, PR Secretary at the Tokyo Organising Committee of the Olympic and Paralympic Games said: “The Tokyo 2020 Games will deliver the most innovative Games and a positive revolution; not only in sport but also throughout various aspects of society; not only during the Games but also during the preparation and after the Games; not only in Tokyo but also across Japan and around the world.”

Yasunobu NISHIMURA, Deputy Director General of Bureau of Olympic and Paralympic Games Tokyo 2020 Preparation, Tokyo Metropolitan Government said: “The legacy of the Games must be one that befits a mature society and is appropriate for a world-leading megalopolis that continues to grow sustainably. The Tokyo government will seize the opportunity of the 2020 Games to enhance urban functions from both tangible and intangible aspects, so that we grow into an even more attractive city.”