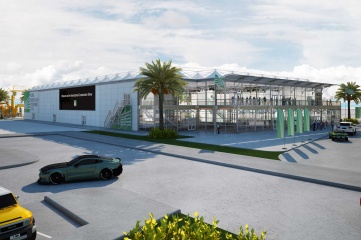 At 6,500 sq m useable space, the King Abdullah Exhibition Centre will be one of the largest temporary structures to be built in the region.

Sustainability is a key feature of the building, which has an expected life span in its current location of between five to ten years. Following this, it can be dismantled and reused in a new location, as exhibitions move to a permanent facility being built in the coming years.

The semi-permanent structure, which has a 60 m x 90 m footprint, will house exhibition and meeting space of more than 6,500 sq m – larger than a football pitch. The turnkey venue combines the latest temporary structure technology combined with traditional building techniques to deliver the look and feel of a permanent building. The whole venue is designed with a high specification interior fit out encompassing adaptable conference rooms and retractable exhibition hall divides.

Another advantage of the De Boer temporary structure solution is rapid build-times with construction to be completed within two to three months instead of the usual one to two-year timeframe for permanent builds.

The hall will be centrally located in the King Abdullah Economic City project, situated 100 kilometers north of Jeddah. This newly planned city has injected around SR207 billion ($55 billion) into the local economy, with 260,000 apartments and 56,000 villas planned for completion by 2020. The King Abdullah Exhibition Centre is expected to be the centrepiece in the economic city and a draw for visitors to the region.

Commenting on the contract win, Edward Gallagher, De Boer Middle East’s Business Development Director, stated: “We’re delighted to be partnering with one of the most innovative, forward-thinking organisations and cities in the Middle East in delivering this exhibition centre project. As a result of choosing De Boer Middle East the city can expect to be delivering exhibitions and events by October – drawing thousands of people, driving tourism and bringing in revenue.

“With our continued developments in construction technology, De Boer can now deliver full, turnkey venues for any need, from temporary airport terminals to warehouses and sports facilities to exhibition venues in weeks instead of years. These are facilities that will last at least 10-15 years without any maintenance overhaul.

“In a growing, forward-thinking environment such as the Middle East where governments, developers and companies are continuing to invest, whether building new cities or just expanding their operations, we are seeing ever-increasing demand for our solutions as people realise it’s possible to have something akin to a permanent facility but in a fraction of the time,” Gallagher concluded.

With around 500 projects per year, De Boer also delivers the world’s largest temporary exhibition hall for the bi-annual Farnborough Airshow in the UK and installs temporary structures annually at the largest global trade fair – Bauma in Germany.