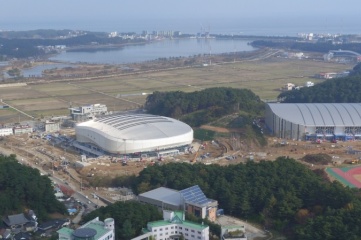 The Gangneung Ice Arena, completed in December 2016, is one of the six newly built venues for the PyeongChang 2018 Winter Games (Photo: POCOG)

Temporary power provider Aggreko has been awarded the contract to deliver electricity to the 2018 Winter Olympic Games in PyeongChang.

The deal is valued at approximately US$40m and Aggreko will also have sponsorship of the Games.

The company will generate electricity for all 15 competition venues in the mountainous resort county of PyeongChang.

The International Broadcast Centre in PyeongChang will also be powered by Aggreko.

"I am delighted that Aggreko has been appointed the official power provider for the Olympic Winter Games PyeongChang 2018,” said Chris Weston, chief executive officer of Aggreko.

“We look forward to helping the organising committee deliver another successful Games."

Aggreko also has a long track record of providing power to entertainment shows, such as I’m a Celebrity, Cirque du Soleil and music festivals including Glastonbury, as well as high profile events like the US Presidential Inauguration.