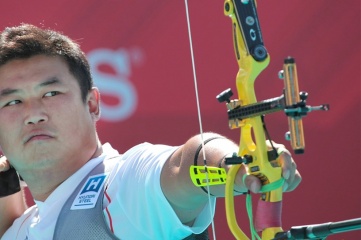 Axcel Sights is the first company to join World Archery’s new sponsorship programme, through which it will support the Archery World Cup and World Archery Championships over 2015.

Signing a one year deal, Axcel Sights are now the Official Sight Partner of World Archery in 2015.

World Archery’s new sponsorship programme is designed to offer organisations greater exposure around international events, as well as to provide greater opportunities to develop the sport.

The US company had assumed title sponsorship of the European stage of the 2013/14 Indoor Archery World Cup in Telford and supported national events in the Netherlands, the US, Britain, Italy and other destinations in recent years.

Axcel Sight’s parent company has just celebrated its 20th anniversary of producing archery products after launching its first in 1995. The company owns a large portion of the US domestic archery market.

The company has grown quickly internationally over the last decade with the introduction of compound target sights and marketing directed overseas.

The recurve versions of the company’s sights have been well-received, with many top and recreational archers adopting the equipment.

Recalling his experiences of the London 2012 Olympic Games, Axcel Sights president Gregory Summers said “I visited with my family and watched the recurve men’s finals. I saw OH Jin Hyek take gold– and realised he was shooting one of our sights.

“I didn’t know the Korean Olympic Champion was an Axcel archer until I saw it there in London!”