Home
»
News
»
Is sport the new rock and roll? 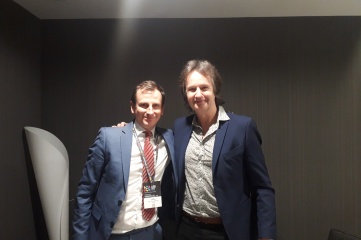 Sport and music are great ways of getting satisfaction, but the similarities don’t end there, Matt Clifford of the Rolling Stones tells Ben Avison of Host City

“The world has changed how we consume sports and entertainment. I’m lucky to be between the two and see both sides,” composer Matt Clifford says. “One of the first things I said to UEFA when I started working with them was, you know all these stadiums – I’ve played in them with the Rolling Stones.”

How do you get to join the Rolling Stones? “Like anything in life it’s like being in the right place at the right time,” he says.

Thirty years ago, Clifford was recording with a producer, Chris Kimsey, whose next project was a Rolling Stones record, Steel Wheels – which went on to achieve multi-platinum sales. “He saw me as someone who would fit in with working with those people. I was sent off to Barbados where Mick and Keith were working at that time. I walked in and said is this the gig, and Mick says yes, every Thursday night – so off we went. And the next day I was having lunch with Princess Margaret on the beach in Mustique!”

There are very close parallels between the way sports events and entertainment events are presented in a stadium. He went to the Stade de France recently to watch France versus England in the Six Nations, five years after playing there with the Rolling Stones.

An element of spontaneity helps to create these levels of excitement in both sport and music. “You don’t know the outcome either way – you don’t know who is going to win the match, or which songs the band is going to play.

“With a band like the Stones it’s all about live performance, it’s all in the moment. There’s a lot of unpredictability with the Stones. You have to keep your wits about you! There are moments on stage with the Rolling Stones where, after 60 years, they’ll be out playing a song, something will go wrong, Mick will turn around to Charlie Watts and they are exactly still the same 18-year-olds who played in a tiny club in Richmond in London, and they’ve kept that alive. You see the same thing on the football pitch – that extraordinary telepathy that elevates it to a different level.

“There are so many parallels between music and sport. You have soloists, you have great teams. A rock group is all about being a team and knowing what your role is.

But the way people consume and experience sports and music has changed immensely over Clifford’s career.

“The live experience has changed on technical levels. The sound reproduction and the experience of a concert is incredibly different – with HD LED screens and incredible lighting. PAs are smaller and so much better.”

But when it comes to sports events there is still much room for development of the audio experience, he says. “It’s an area that could be improved, especially now there is a lot of broadcasting in surround sound.

“So much of the experience when you go to a game is the sound. And the volume, when you’ve got a band playing here and another band over there, is extraordinary. It’s difficult technically because when you are watching you have to hear the commentary.”

When not on the road with the Stones, Clifford writes anthems and official music for major sports events, which play a huge role in the event experience. Music is used in many different ways and for different moments on TV, on online platforms and in the venue.

“You come in as the composer and present two or three very different ideas, which are passed through several very large committees at a glacial pace. Because music is such a subjective thing, everyone on a committee will have a different emotional reaction to it. Once you’ve gone through that process and got the approval, the next stage begins, which is being able to do all these difference versions for different purposes, at different lengths and at different tempos, but keeping the brand theme. I find that exciting and challenging.

“When you get a brief for music for sport they often give the same words – inspiring, powerful, spirit of togetherness – but every sport is different, so you have to find that essence, the energy that is going to contribute to a broadcast of a live event.”

Clifford’s musical background was in the classical world, growing up playing in orchestras and singing  as a choirboy in Gloucester cathedral – a world apart from sports.

“Italia ’90, where the BBC used Nessun Dorma as the theme music, was almost the first time that you used the gravitas and emotion that you get from classical music to go behind sport and take it to another level. Before that, football songs had mainly been pop songs.”

Once again, Clifford found himself in the right place at the right time. He was hired in 2003 by the anthem creator Tony Britten to modernize the Champions League theme – probably the most recognisable sports audio brand.

“It’s the theme that everyone aspires to – everyone would love to have that recognition. Tony Britten who composed the piece was inspired by Zadok the Priest by George Frederic Handel – and he absolutely hit the nail on the head. With my experience of working with different genres of music I was able to extend the reach of the Champions League music.”

For example, Clifford’s added a modern beat to the recognisable choir element for the walk-on music. Another key moment in a sports event is the cup lift.

“The first Champions League final I was invited to was 2005 in Istanbul, which is still the most amazing game I’ve ever been to. When Steven Gerrard lifted the cup, they played a piece of music I had written, which was amazing.”

Clifford also composed the anthem for the Six Nations, combining instruments from all of the six nations, which is played in the stadiums at every Six Nations game. He also worked with FIFA 2010 in South Africa, for which he won the pitch as part of a graphics company. As a result, he was able to take Mick Jagger as his guest, “to watch England being knocked out against Germany, despite a disallowed goal that was clearly over the line. Mr Blatter was very friendly before the game, but after the game we couldn’t find him at all!”

Clifford has never written an anthem for a club. “I think that would be a tricky situation – it’s like you’re trying to impose something. You can do that on the top level – the global level, or the broadcast level – but to say to fans you should sing this on the terraces, that’s not the right way to go.”

Fans tend to choose their own songs anyway. “Sometimes the song relates to football, but I’m Forever Blowing Bubbles – where does that come from? There are these associations that just happen. They are so ingrained into the culture of the club – when you listen to Liverpool fans singing You’ll Never Walk Alone at the Champions League final it’s amazing.”