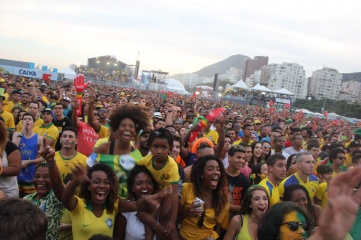 Fan zones are a very attractive and important feature of major sporting events. There are several reasons for this, including:

But unrestricted access is a real problem in terms of security, since it is impossible to track who is inside the fan zone. In the event of a terrorist act committed inside, it would be a real nightmare finding victims and attackers.

Some fan zones hold more than 70,000 people. In these zones, the cost of proper security is almost unsustainable. Cities and towns that host these zones are unlikely to be assisted by the organisers, who demand many things but rarely finance them.

Let us remember that the attack in Atlanta 1996, with two deaths and a large number seriously injured, took place in a fan zone – even if it was not called that at the time.

People who attend fan zones are rarely rich people. But maintaining free and unhindered access to the fan villages is to continue running a particularly high risk, putting the life of fans in danger.

While there is no such thing as zero risk, it is possible to considerably reduce risk simply and without great expense by:

- controlling entry and exit with human security, as well as patrols inside the zone;

- charging a very low admission fee for entry badges with a credit card requiring registration on the internet, to show who is inside the zone.

Even though this will remove some of the spontaneity that makes these zones so attractive, it will significantly reduce the risk and allow fans and families to go to these joyful places that are so motivating for local authorities and their image.

For the Youth Olympic Games Buenos Aires 2018, the organisers decided that entry for spectators would be completely free of charge, but they required registration on the internet. Though this did not shorten queues at the stadium entrance, it enabled a good level of security to be achieved for an enormous crowd – and this is vital today.