Home
»
News
»
Qatar World Cup stadiums to be confirmed in 2015 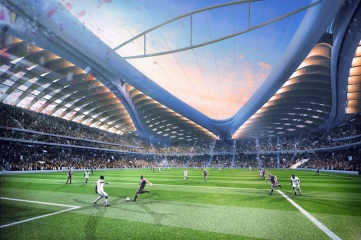 Al Wakrah is the only new stadium so far under construction

Cost is not the issue in deciding how many venues to build for the 2022 World Cup, Nasser Al Khater of the Supreme Committee for Delivery & Legacy tells delegates at the Soccerex Asian Forum

The number of stadiums that will feature in the 2022 World Cup still hangs in the balance and will not be finalised until next year, according to Nasser Al Khater, executive director for marketing at the Supreme Committee for Delivery & Legacy.

It has been widely reported that Qatar plans to drastically scale down its ambitious venue plans for the 2022 World Cup. These reports were sparked by comments made by the Supreme Committee’s senior manager for projects at a conference on 23rd April, who stated that only eight stadiums would be used.

With the Supreme Committee having neither discounted this possibility nor given reasons why cutting back to eight stadiums might be an option, the international sports event community has come up with its own suggestions, with cost control being considered to be a possible motivation.

Speaking to delegates at Soccerex Asian Forum on Tuesday, he said “In our bid, as FIFA stipulates, we proposed a minimum of 12 and a maximum of 18.”

The minimum number of stadiums required by FIFA is eight and this figure remains a possibility.

“In 2015, will decide alongside FIFA how many need for the World Cup,” he said.

Al Khater was speaking in place of Hasan Al Thawadi, Secretary General of the Supreme Committee for Delivery & Legacy, who was unable to attend the event.

“Contrary to what international media says, there is no single injury or death on World Cup projects,” he said.

“However, from the very beginning we have taken the issue of workers’ welfare very seriously,”

Although civic infrastructure developments are progressing rapidly in Qatar, construction has not started on World Cup sites. Only one of the new stadiums, Al Wakrah, is under construction.

By the end of 2014, five World Cup stadiums will be under construction, Al Khater told delegates.