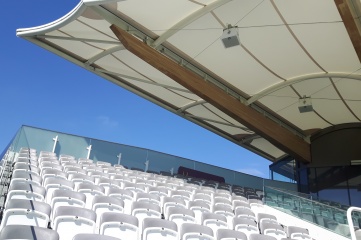 Venue owner Marylebone Cricket Club (MCC)’s Assistant Secretary (Estates) Robert Ebdon said, “MCC is very proud of its history of commissioning individual stands and buildings at Lord’s, each with their own character. With their vision for the new Warner Stand, Populous has designed an architecturally distinctive and pioneering building which has enhanced the aesthetics of the ground while delivering world-class functionality.”

The new stand replaces the original 1950s Warner Stand, which was considered unfit for purpose. What was once one of the worst stands in world Cricket is now leading the way.

“It is a privilege for the practice to add to the wonderful heritage of the ‘Home of Cricket’,” said Philip Johnson, Populous Senior Principal and Project Lead.

“The new Warner Stand has been designed to complement the existing campus of buildings at Lord’s, providing excellent views of the action, world-class match control facilities, a number of bars, and a new restaurant with fantastic views overlooking the ground. Lord’s has a special place in the hearts of cricketers and fans, and this new stand will help cement its position as the finest cricket ground in the world.”

Located between the Grade II listed Pavilion and the Grand Stand, the new Warner Stand has been designed to deliver an enhanced spectator experience and a significant upgrade to facilities.

Views and accessibility have been improved while the time taken to travel between the seats and amenities has been decreased.

The venue has 100 days on non-cricket events each year and income from these events will be boosted by revitalised hospitality facilities, including a restaurant, bars at all levels and catering outlets. The enlarged, 135-cover restaurant occupies features a glazed wall with impressive large sash windows along the side of the room facing the pitch, offering stunning views over Lord’s.

The project team included consulting engineers Arup and contractor BAM Construct Ltd, who selected a white, translucent insulating tensile fabric membrane from Tayo for the roof over the restaurant - the first use in Europe of this aerogel-coated fabric.

In addition to Tayo’s roof, other subcontracted elements included glazing from Fleetwood, in-situ concrete from GCL, precast concrete from Creagh of Northern Ireland, and staircases and glass balustrading from Structural Stairways.

The fabric roof is supported by American White Oak beams that form a series of structural ‘ribs’, which cantilever over the seating tier, radiating from the corner of the Ground in a form reminiscent of a spreading palm leaf. Rainwater runs back to the rear where it is collected at basement level and stored to flush lavatories.

In addition to rainwater recycling, a green roof over the rear part of the building and green walls on the garden facade, solar thermal and photovoltaic roof panels have been incorporated into the roof to generate hot water and electricity. Boreholes and ground source heat pumps are also an integral part of the energy system, making the heating and cooling system carbon neutral.

Populous will continue to work with MCC developing its masterplan for the venue as a whole. According to MCC, the overall redevelopment plan is scheduled to continue through to 2029 and will cost a total £180-200m.

The future development of the ground will further boost its ability to host non-cricket events, including a £42m new East Gate building including a multi-function hall scheduled for completion by 2024.