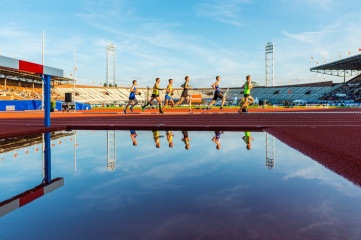 From 6 to 10 July 2016, Amsterdam's venerable Olympic Stadium will host the 23rd European Athletics Championships – the first time the event has been held in the Netherlands.

Around 1,300 athletes from 50 countries will be there for the launch. As this international sports meeting will be held immediately before the Olympic Games in Rio, the programme has been reduced from the usual 47 disciplines to just 42. The marathons and the walking races will not take place.

The running track was given a new synthetic surface from Polytan in June 2015 in order to prepare the best possible surface for peak performances by all the other track and field athletes. The premium Polytan PUR coating in brick red – a standard Polytan colour – was chosen.

The surface in Amsterdam is 17 mm thick and complies with the requirements of the International Association of Athletics Federations (IAAF), making it suitable for international competitions with officially recognised personal bests and records.

The first "litmus test" for the new synthetic surface from Polytan was the national Dutch Athletics Championships in July 2015 – immediately after its installation – and the important "IAAF Class 1" certification of the stadium.

The facility is unusual in that the water jump for the steeplechase is the outside of the running track. This means that more events can be held simultaneously than is normally the case.

Now a listed monument, the stadium was built in the Stadionbuurt district of Amsterdam for the Summer Olympics in 1928. It was designed by the Dutch architect Jan Wils, who was awarded a gold medal for the building in the art competition held as part of the Games.

Historically speaking, the stadium belongs to the "Amsterdam School" of architecture, the famous Dutch classic Modern style, which is also described as Brick Expressionism.

The competition arena has a closed brick facade on the outside that looks neither dark nor heavy in spite of its large size. This is down to the varied division of the external envelope – a characteristic feature of this architectural style.

In contrast to the facade, the only thing visible inside the stadium is the reinforced concrete frame in the style of the architecture of Frank Lloyd Wright, which was popular at the time.

A narrow tower on which the first ever Olympic flame was set alight marks the main entrance. It was and still is the ground's emblem.

The stadium was heavily used in the decades following the Olympic Games – it was the home ground of the well-known football club Ajax Amsterdam for a long time, for instance. It deteriorated visibly during the 1990s, however, until expensive renovations breathed new life into it from 1996 onwards.

The stadium was restored as far as possible to its original condition, with the demolition of a grandstand extension dating back to 1937. Numerous sporting and cultural events are held there now and it is the base of Amsterdam athletics club Phanos.

By opting for the Polytan PUR sports surface, the organisers in Amsterdam decided on a water-impermeable, extremely durable solid synthetic surface consisting of a continuous blend of PUR and elastic rubber granules all the way from the base to the top layer. Polytan employees used the in-situ construction method to install it directly on site.

Not only does the solid structure make the surface extremely durable, it also greatly enhances the tread elasticity of athletes and thus their acceleration. The track is significantly faster than conventional multi-layered synthetic surfaces. In addition, the top layer of the sports surface is interspersed with EPDM granules, which means that it is suitable for sports shoes with spikes.

This article was contributed by Polytan. For more information visit www.polytan.com