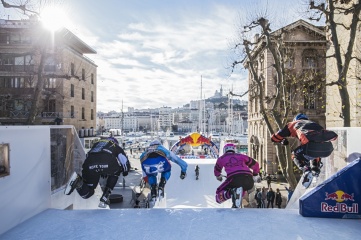 Nüssli rose to the challenge of creating Crashed Ice race track in the middle of the city, drawing on their experience of having delivered tracks for the event in Munich and Lausanne.

The race began with four skaters on the track, which began at the terrace of the Intercontinental hotel and finished in front of the Marseille City Hall.

The aim is to compete with the other skaters with the greatest speed, and finish the extreme track with sharp turns, high vertical drops, and other hazards as quick as possible. The athletes make daredevil jumps and reach speeds of up to 80 km/h.

Nüssli was commissioned for the construction of a 340 m long ramp, which included elevation differences of up to 26 m, as well as the assembly of four lighting towers, a podium, and nine television platforms.

Assembling the structure in the middle of the city was often complicated in terms of loading and unloading, Nüssli said.