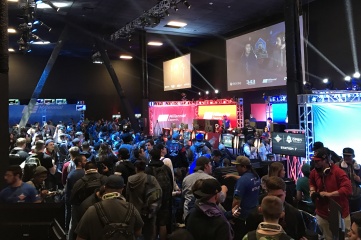 Las Vegas’ huge array of entertainment options has a new addition: a facility solely for esports tournaments and events.

Called “thE Arena”, it has been created in downtown Las Vegas at the Neonopolis by Millennial Esports Corp – a company that owns and operates some of the leading mobile apps in esports.

The 15,000-square foot studio and arena will be Nevada’s first permanent esports centre and is wired for live streaming and casting, hosting players and facilitating tournaments 24 hours a day, 365 days a year. It will seat up to 500 people and feature a state-of-the-art main stage with built-in broadcast capacity and DJ booths.

Speaking to Host City ahead of thE Arena’s opening on March 3, Millennial Esports Corp CEO Alex Igelman said: “We are extremely excited to have been pioneers in the design, planning and construction of the first permanent esports facility in Nevada.”

The opening will be marked with a Millennial Esports Halo World Championship Open at the venue. Custom-made gaming stations will occupy centre stage with theatre-like seating and VIP areas. Audio and visual components include an LED video wall with advanced lighting and sound plus cinema projectors.

Three years in the making, Igelman explained how the venue concept was devised. “It was in November of 2014,” he said. “I still remember the day. I was meeting with my colleague Chad Larsson and one of the original investors.

“I told them the future of this industry was in Las Vegas and that we had to build an area and studio there. At first both of them were skeptical, but when I laid out the overall vision they both warmed up to the concept.

“The feedback from the esports community has been unbelievable. We have received many unsolicited emails congratulating and thanking us for building thE Arena from local, national and international esport fans and community members. We are truly overwhelmed by the response.”

In 2016 a report published by SuperData Research revealed that the global esports industry captured a record 213 million viewers and generated $892 million dollars in revenue.