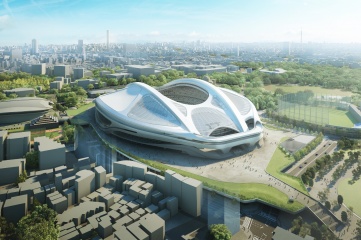 The new national stadium is set to host the opening match, semis and final of the 2019 World Cup, as well as the opening and closing Olympic ceremonies, athletics, football and rugby sevens in 2020 (Photo: Tokyo 2020)

Hosting the Olympic Games and the Rugby World Cup within the space of a year is a major challenge for the host nation. How will Japan’s venues cope? Robin Yapp investigates

It seems fitting that Japan, which hosted Asia’s first Olympic Games in 1964, will host the continent’s first Rugby World Cup in 2019, a year before the Olympics return.

Few countries could expect to host two of the world’s biggest sporting events in consecutive years but the Land of the Rising Sun has few equals in getting things done.

When 20 nations begin competing for the Rugby World Cup in September 2019, Japan will have had a decade to prepare since winning the right to host it.

The Tokyo Olympic Games, involving more than 200 countries and 28 sports, will begin on July 24 2020 – just seven years after the host city was announced.

Fujio Mitarai, President of Japan Rugby 2019, expressed delight when his country was awarded the Olympic Games, saying “the two events will work very well together”.

Excitement about the Olympics could encourage more Japanese to watch rugby, while the earlier tournament will provide valuable logistical and security experience.

Such benefits may largely be limited to the Olympic Stadium and surrounding area, however, given the lack of shared venues and difference in scale between the two events.

The focal point for the World Cup and the Olympic and Paralympic Games will be the new 80,000-seater Olympic Stadium in Tokyo’s Shinjuku district.

It will be built on the site of the 57,000 capacity Kasumigaoka National Stadium, which hosted the opening and closing ceremonies and track and field at Tokyo 1964, but is due to be demolished in the near future.

British architect Zaha Hadid’s original design has been revised but the Olympic Stadium will still be twice the size of London 2012’s stadium following an estimated $1bn of works. It will feature a retractable, arching 70-metre high roof.

It will host the World Cup’s opening match and final, as well as the opening and closing Olympic ceremonies, athletics, football and rugby sevens.

Both rugby semi-finals in 2019 and the third-place playoff are also likely to be played in it after Yokohama chose not to put forward its International Stadium – venue of the 2002 football World Cup final.

Japan Sport Council will own the stadium, which will be used for international football, national track and field championships, concerts and other cultural events post-2020.

Where will the rugby matches happen?

Most of the other matches at the 2019 tournament will be played in grounds with capacities between 20,000 and 45,000 used by teams in the J.League, Japan’s top football division.

Japan’s World Cup bid said Hong Kong and Singapore would each host some matches, but both cities later withdrew in a blow to the goal of raising rugby’s profile across Asia.

Organisers insist they will still select host cities that can create excitement about the sport from 14 that have applied, ranging from Sapporo in the north to Nagasaki in the south.

The final 10 to 12 confirmed venues will be announced in the first half of 2015.

Other than the Olympic Stadium, the biggest bidding venue is the 50,889 Shizuoka Stadium, home to Jubilo Iwata and Shimizu S-Pulse football clubs.

The smallest, with a proposed capacity of 15,000, is the Kamaishi Unosumai Reconstruction Stadium in an area devastated by the 2011 tsunami.

In addition to Yokohama not bidding, another surprise was authorities in Osaka putting forward the Hanazono Rugby Stadium, Japan’s oldest dedicated rugby ground.

The 30,000-seat venue opened in 1929 and the World Cup could offer an ideal opportunity to refurbish it and raise the capacity.

In February 2015 the Tokyo 2020 Organising Committee will submit its Games Foundation Plan to the International Olympic Committee (IOC), setting out a detailed vision.

There are 37 proposed competition venues, of which 22 need to be built and 15 already exist (including two needing major refurbishments).

Exactly half those to be built are due to become permanent legacies for the city, while the other 11 are either temporary or can be relocated.

The 1964 Games acted as a catalyst for Japan to make an extraordinarily rapid rise, from a country recovering from the devastation of World War Two to a beacon for development in Asia.

Japan’s outstanding transport infrastructure was an important part of its 2020 bid at a time when the IOC may have wanted a ‘safe bet’ amid global economic uncertainty.

While Japan’s economy has its own difficulties, the nation’s developed status and pledge to host an “athlete-focused and compact” Olympics helped it defeat Istanbul in the final round vote.

The successful bid said 28 of Tokyo’s 33 competition venues would be within eight kilometres (5 miles) of the Olympic Village with many situated around Tokyo Bay.

But this pledge was thrown into doubt when the IOC recently urged Tokyo to consider more existing venues outside the capital due to rising labour and construction costs.

Impressively, three of the 1964 venues will once again host some of the world’s leading athletes.

Yoyogi National Stadium, which hosted swimming and basketball in 1964 and sport, concerts and conferences since, will host handball in 2020.

Nippon Budokan, described by organisers as being to Judo “what Wimbledon is to tennis”, will again host Olympic Judo 56 years after it first did.

The Tokyo Metropolitan Gymnasium, situated next to the Olympic Stadium, will see table tennis action in 2020, having staged gymnastics and water polo in 1964.

Legacy planning has taken into account the social, developmental and sustainability agenda in the city’s long-term urban plan ‘Tokyo Vision 2020’.

The Olympic Stadium lies in one of four large sports areas being developed under the vision, as does Musashino Forest Sport Centre in western Tokyo.

Due for completion in 2016, its gymnasium will host Modern Pentathlon and after the Games it will stage concerts, cultural events and local sports competitions.

Tokyo residents will also be able to enjoy facilities at the Olympic Aquatics Centre after the Games.

The centre will be remodeled and the number of seats reduced from 20,000 to 5,000 before it is opened to the public. It will still be used for national and international swimming events.

Tokyo Metropolitan Government will own a number of venues, including the Aquatics Centre and Musashino Forest Sport Centre.

While the number of countries, competitors and venues in the Olympics dwarfs any other sporting event, it lags behind the Rugby World Cup in one respect – lasting 17 days, compared to 45 days for the latter.