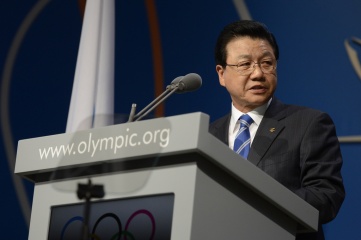 In the spotlight: Jin-sun Kim, President and CEO of PyeongChang Organising Committee of the Olympic Games

The IOC Coordination Commission has congratulated the 2018 host city of PyeongChang on progress so far, but stressed that timelines are tight and targets cannot be missed

The International Olympic Commission (IOC) Coordination Commission on Thursday completed its third inspection visit of PyeongChang, the host city of the 2018 Winter Olympic Games, concluding that progress was good but that work could not be allowed to slip behind schedule.

The Commission highlighted transport management, accommodation contracting and developing the Mountain Olympic Village as areas where timeframes are particularly “tight” for the PyeongChang Organising Committee of the Olympic Games (POCOG).

Venue construction, test events, marketing and Games services have also been identified as “key areas that require POCOG’s focus over the next six months,” the IOC said in a statement.

“We were able to see that a large amount has been accomplished by POCOG and its partners since our last visit in June 2013,” said Gunilla Lindberg, chair of the IOC coordination commission. “The 2018 Games are on the right track but it is clear that much work remains.”

POCOG President and CEO Jin-sun Kim said: “The eyes of the world are now on PyeongChang.

"This year is a big turning point for us. We must establish a solid framework. As I always stress, we have no time to practise and no time for trial and error. We will streamline our Master Schedule and set our priorities straight so that everything runs smoothly according to the timeline.”

The IOC said in a statement: “With timelines tight for the completion of accommodation contracting, the development of the Mountain Olympic Village and the transport management plan, the Coordination Commission encouraged POCOG to ensure that the appropriate focus and resources were dedicated to these important areas.”

Construction companies are being appointed for venues and some construction is underway. The commission “underlined the need for timelines to be carefully defined and adhered to, so as to avoid any impacts on test events.”

The IOC will undoubtedly be keen to avoid a situation like Rio 2016’s, where construction is critically behind schedule.

The commission also highlighted the need to prepare for the non-infrastructural aspects of test events, saying “the hiring and training of staff and volunteers should also begin in the near future”.

In the field of marketing, POCOG is in the process of finalising its first domestic partnership contract to build on progress so far.

“The awareness of the PyeongChang 2018 Olympic Winter Games has been strengthened by the success of PyeongChang House in Sochi, and the very innovative Closing Ceremony segment, which presented the 2018 Games to a worldwide audience of millions,” the IOC said. “The Commission encouraged the local organisers to continue to engage and promote their Games at this high level over the next four years both at home and abroad.”

The meetings in PyeongChang were attended by all levels of government. “The participation of the International Federations, the Korean Olympic and Paralympic Committees, and the Korean national winter sports federations was also very beneficial and allowed POCOG to engage in in-depth discussions on all topics related to the venues and sport,” said Lindberg.

“We are confident that POCOG and Korea will deliver great Games for the athletes in 2018.”

In June, PyeongChang will host the official IOC Debriefing of the Sochi 2014 Winter Games. The fourth Coordination Commission visit to PyeongChang will take place at the end of November 2014.