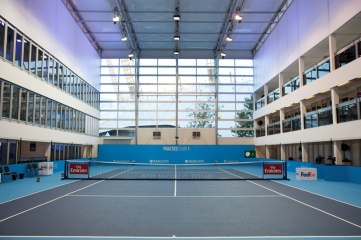 The ATP World Tour Finals at the O2 in London took on special significance in 2016, with Andy and Jamie Murray creating tennis history by achieving World Number One rankings in singles and doubles.

Behind the scenes, UK-based Arena Group supported the event rights holder ATP and venue operator AEG to produce a new look for the tournament, having secured a three year contract with the ATP Tour.

After the 2015 Barclays ATP World Tour Finals, AEG informed the ATP that the space previously used for the Fan Zone was no longer available and conversations between the ATP and Arena Group began to redesign the event’s footprint. It was decided to relocate the Fan Zone inside the venue and move the players and sponsors facilities, including the practice courts and players restaurant, to a temporary facility adjacent to The O2.

Arena Group responded to this brief to create over 8,500sqm of temporary venues in keeping with the environment. The new I-Novation system was used to create a flat-roof structure for the VIP reception and security area.

“There was a lot of consultation, planning, investment, innovative engineering and creative thought behind this project and I think it has paid off with the best structure we’ve ever produced for an event,” says project manager Dan Bluff.

Using its I-Novation system, Arena Group designed and built a 40m x 50m structure with 13m high legs, giving the headroom the client requested and delivering a temporary venue with a permanent feel.

This external building mirrored the style of The O2 arena, forming an outer skin comfortably accommodating the players and sponsors’ facilities inside it, which were comprised of two 40m x 15m Arena triple-decker hospitality structures either side of a practice court.

I-Novation’s improved insulation properties were appreciated in the November climate, as were Arena’s new wooden staircases and walling system, all of which contributed to the overall quality of the temporary venue.

Guests arrived through a VIP reception and a security area. These new structures were designed in line with the client’s wish to have a building that didn’t have an apex, to fit in with the local environment. Arena Structures’ in-house structural engineers adapted the company’s triple deck base system to create a flat roof venue covering a 250sqm area with no internal pillars.

The second practice court was housed within the O2 Arena’s Tensile Fabric Structure at the core of the relocated Fan Zone, alongside the double decker media facility.

Three broadcast studios were installed over the seating at one end of the O2 Arena. The event was broadcast to millions of viewers, who enjoyed a spectacular week of tennis culminating with Andy Murray being crowned both Barclays ATP World Tour Finals champion and the year-end world number one.

“The Barclays ATP World Tour Finals is the climax of the men’s professional tennis season. As such, we strive to deliver the best possible experience for all stakeholders at the tournament, whether that be the players, sponsors, media or fans,” says event director Adam Hogg.

“Working closely this year with AEG and Arena Group we were able to deliver a world-class event that provided all of these groups with an enhanced offering and a positive experience for their time at The O2.”