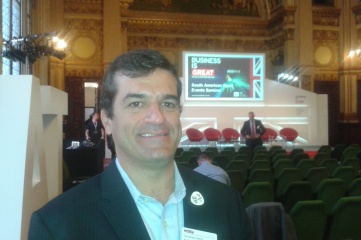 Fernando Cotrim, head of procurement at Rio 2016, says perceptions of Brazil's ability to host have improved as a result of the 2014 FIFA World Cup

The scale of Rio 2016’s infrastructure projects is immense and partnership with experienced suppliers from London 2012 will be crucial for success – but budgets must be carefully monitored.

This was the message given by Rio 2016’s head of procurement, Fernando Cotrim, in an exclusive interview with HOST CITY at the South American Sport Events Seminar, organised by UK Trade and Investment during the Commonwealth Games in Glasgow.

“If you consider that you have the greatest combination of needs in terms of materials and services in one event, you can imagine the size of challenge,” Cotrim told HOST CITY. “We are looking for around 2,500 suppliers to be in place for 2016.”

Cotrim’s major area of focus is temporary construction. “The hardest part is to get the right suppliers at the right time and to build a temporary and sustainable supply chain, he said.

“That’s the challenge – the temporary part is the most important.”

London 2012 has set the template of a mega event where the majority of infrastructure is temporary. “We are taking a similar approach. Probably around 60 per cent of constructions will be temporary.”

Not only is the concept similar to London 2012; Rio 2016 is targeting the same companies. “We will use similar suppliers. The ideal for us is to bring the same suppliers but they come to Brazil, partner with local companies and help our country to grow in this business.”

Cotrim cited Arena Group, who provided temporary venues for London 2012 and Glasgow 2014, as an example of a company with expertise in this area. Other notable suppliers include ES Global, also present at the UKTI event.

Asked what his biggest concern was, Cotrim replied “Always to be monitoring – to have the best suppliers and to stay on budget. That’s a real concern. What we’ve learned from other Games is that if you don’t manage the budget you can go to infinity.

“So you have to be very cautious about the budget. We are always seeking innovative solutions, but at the same time low cost and sustainable.”

Rio 2016 has been under fire for severe delays to its construction projects, particularly the Deodoro Park cluster of venues. Cotrim says the tide of opinion is changing in the wake of a largely successful FIFA World Cup.

“What people saw, what the media saw in the World Cup changed this mindset. Deodoro was a concern, but the suppliers are starting to work and so I think this mindset has changed a little bit. The last comment from the IOC is that we have got back on track and we are in a good shape.”

However, the IOC is still keeping a very watchful eye on Rio 2016 projects. IOC Vice President Craig Reedie confirmed to HOST CITY that the IOC’s head of Olympic Games, Gilbert Felli, will be focused 100 per cent on ensuring a successful Games in 2016.