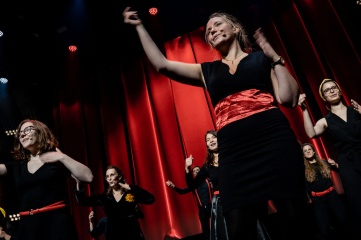 [Source: INTERKULTUR] Thousands of spectators witnessed the unique atmosphere that characterizes the so-called "Olympic Games for Choirs!” digitally and live on site. The more than 300 choirs participating both virtually and live closed the World Choir Games solemnly on Sunday, November 7, during the Closing Ceremony at the Expo in Antwerp.

The Flemish edition stood out in particular for its inclusive character and innovative approach. In 2022, the 12th World Choir Games will be held in Gangneung, South Korea.

At the Closing Ceremony of the World Choir Games 2018 in South Africa, Flanders was announced as the next host region. These World Choir Games were to be the "most inclusive games ever" - a great challenge. For the past three years, the organization had been working on a large festival involving people from a wide range of backgrounds, with a focus on togetherness and solidarity.

Director Koenraad De Meulder looks back on the past edition with great pride: "What seemed almost impossible, we made possible with the 11th edition of the World Choir Games. To be able to sing again, to be on stage and to enjoy it together: that was a godsend. With the momentum of the 11th edition, we will now give even more people the chance to sing together."

In addition, the World Choir Games collaborated with IMEC to develop the Music Box. With this state-of-the-art technology, choirs from all over the world can sing together without delays and in optimal sound quality. Most meeting software is still inadequate for this purpose due to the delay in transmission.

"Due to Covid, these World Choir Games were of course the most unusual event the Choir Olympic movement has ever experienced," said INTERKULTUR President Günter Titsch.

"The Virtual Village and the virtual competitions were an excellent stopgap to allow all those to participate who could not travel themselves to see and enjoy the Games live here in Flanders. I am happy that so many international choirs took the opportunity to participate virtually, but I am especially proud of all the choirs who enchanted us with their beautiful music in the many fantastic concerts last week."

The World Choir Games were also a great success in musical terms. Despite Corona restrictions, more than 300 choirs participated live and digitally in the 11th edition of the event. The free-of-charge Friendship Concerts that took place outside the competitions also attracted hundreds or thousands of spectators.

"An unexpected success! What an atmosphere, what an emotion! With the singers at the shows and their competitions, but at least as much with the entire team, which has done an incredible job to make such a great international singing event possible in the current conditions. Warm-heartedness, togetherness and smiling faces - this is what I remember from the World Choir Games 2021 Flanders," said Sophie Detremmerie, COO of the World Choir Games 2021 Flanders.

"We have all experienced a unique and heart-warming event over the past 9 days. The World Choir Games have shown us the importance of this amateur art," said Luc Delrue, Secretary General of the Ministry of Culture. "We have once again given a stage to the many thousands of singers and choral enthusiasts. We have seen again the passion and the pure joy of making music together, of singing. And that was visibly good!"

Due to the Corona crisis and the related restrictions, the Flemish edition of the singing festival was postponed for more than a year. Therefore, the next games will be held again as early as 2022. The South Korean coastal city of Gangneung takes over the choir flame from Antwerp and Ghent.