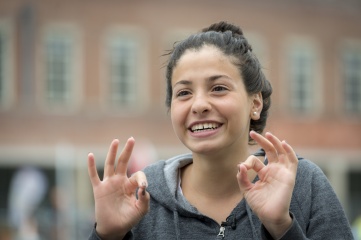 Syrian swimmer Yusra Mardini, hosted by the NOC of Germany, will compete as part of the Refugee Olympic Team

Athletes based in three continents will compete together at Rio 2016 as one “Refugee Olympic Team”, which the IOC says will demonstrate the contribution refugees can bring to society

Ten refugee athletes will take part in the Olympic Games Rio 2016 this summer in the first ever Refugee Olympic Team (ROT), the International Olympic Committee announced on 3 June.
Rami Anis, Yiech Pur Biel, James Chiengjiek, Yonas Kinde, Anjelina Lohalith, Rose Lokonyen, Paulo Lokoro, Yolande Mabika, Yusra Mardini and Popole Misenga will march with the Olympic flag immediately before host nation Brazil during the Opening Ceremony.
“These refugees have no home, no team, no flag, no national anthem. We will offer them a home in the Olympic Village together with all the athletes of the word. The Olympic anthem will be played in their honour and the Olympic flag will lead them into the Olympic Stadium,” said IOC President Thomas Bach.
”This will be a symbol of hope for all the refugees in our world, and will make the world better aware of the magnitude of this crisis. It is also a signal to the international community that refugees are our fellow human beings and are an enrichment to society. These refugee athletes will show the world that despite the unimaginable tragedies that they have faced, anyone can contribute to society through their talent, skills and strength of the human spirit.”
As part of the IOC’s pledge to aid potential elite athletes affected by the worldwide refugee crisis, NOCs around the world were asked to identify any refugee athlete with the potential to qualify for the Olympic Games Rio 2016. Such candidates could then receive funding from Olympic Solidarity to assist with their preparations and qualification efforts.
Forty-three promising candidates were initially identified. Selection of the ten athletes was based on consultation with their host National Olympic Committees (NOCs), International Federations, the UNHCR and the NOCs of their countries of origin. Nomination criteria included sporting level, official refugee status verified by the United Nations, and personal situation and background.
Five of the athletes originate from South Sudan, two from Syria, two from the Democratic Republic of the Congo and one from Ethiopia. Five are hosted by the National Olympic Committee of Kenya, two by Brazil, one by Germany, one by Luxembourg and one by Belgium.
Six of the athletes will compete in athletics running events, two in swimming and two in judo.
Like all teams at the Olympic Games, the ROT will have its own entourage to meet all the required technical needs of the athletes. Olympian and former marathon world record-holder Tegla Loroupe (Kenya) was named the team’s Chef de Mission, while Isabela Mazão (Brazil), who was proposed by the UNHCR, will act as the Deputy Chef de Mission. They will lead a crew of five coaches and five other team officials.
The team will be housed in the Olympic Village like all the other teams and will get its own welcome ceremony at the Olympic Village, like all other teams. Team uniforms will be provided by the IOC.
For all official representations of the team (including possible medal ceremonies), the Olympic flag will be raised and the Olympic Anthem will be played.
A proper doping control process will be introduced through the World Anti-Doping Agency (WADA). Olympic Solidarity will cover preparation, travel and other participation expenses for the team and will continue to support the athletes of the team after the Olympic Games.
The IOC will also continue to support the refugee athletes after the Games.
Through Olympic Solidarity and its Olympic Scholarships for Athletes programme, the IOC aims to help smaller NOCs prepare and qualify their athletes for the Olympic Games. The IOC’s priority is to focus primarily on athletes who need the assistance the most and to place them on an equal footing with their competitors from more developed regions of the world. In the lead-up to London 2012, for example, 1,264 Olympic scholarships were allocated to athletes from 171 NOCs in 21 sports. 657 'scholars' eventually took part in the Games. They won a total of 72 medals.
Following the approval of Olympic Agenda 2020, the IOC’s strategic roadmap for the future of the Olympic Movement, and in light of the current global refugee crisis, the IOC also created a special fund of USD 2 million to develop relief projects through sport in collaboration with NOCs around the world. Over 15 NOCs have already made use of this fund.
The IOC already works with a number of United Nations agencies to help refugees around the world. For the last 20 years, the IOC and UNHCR in particular have been using sport to support healing and development among young refugees in many camps and settlements around the world. They have consequently seen thousands of refugees benefit from sports programmes and equipment donated by the IOC.
The biographies of all athletes and their entourage are available here.