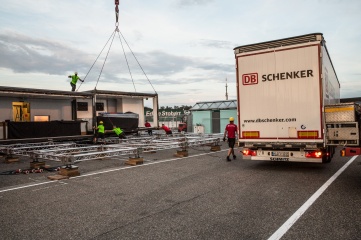 By the time the time the athletes on the track hear the starting pistol, the team from DB SCHENKERsportsevents has already completed most of its work. The logistics experts are organisation specialists for major sports events. They begin their preparations long in advance, developing logistics plans for management committees, associations, hospitality firms, sponsors, and service providers.

DB Schenker is the leading name in international sports and events logistics. Its partners come from every sporting discipline – football, winter games, sailing, athletics, motorsport and a lot more besides. Around the globe, DB SCHENKERsportsevents employs some 150 people who put their expertise at their customers' disposal, combining precision logistics with a passion for sporting pursuits of all stripes.

Always on the ball

In sports terms, 2016 was a superlative year. DB SCHENKERsportsevents toured the planet as it delivered logistics services at the Olympics and Paralympics in Rio, the UEFA EURO tournament in France, and a host of big-name tracks for the Formula One season.

These major events required months of preparations, which covered everything from long-distance planning to on-site services, and which were then followed up by the necessary activities following the events' conclusion.

From delivering canoes for the competition itself to champagne for the party afterwards, the German team at DB SCHENKERsportsevents dispatched over 1,030 shipping containers of material to Rio. They contained essential provisions for the Olympic Village, the German national team, the house that served as their residence during the Games, as well as for the opening and closing celebrations and the VIP catering service organised for every stadium.

"As long ago as September 2015, i.e. almost a full year before the Games, one of our team was already in Rio to coordinate and oversee our planning activities on-site,” Christian Schultze, SVP at DB SCHENKERsportsevents.

“The most intense period for us was just before the Games, and then the whole team was involved. The Olympics and Paralympics represent a challenge, but it's one that we enjoy taking on time and again."

The Olympic Village has accommodated some 17,000 athletes during the course of the Olympic and Paralympic Games. DB Schenker sent some 940 containers of material to Rio to equip the village, which is often described as the "heart" of the Games. At no other sporting event do so many world-class athletes live in such close proximity, and the village is designed to provide every possible service from accommodation and catering to training facilities and platforms for meetings and events.

Similarly, the German house served as a place where athletes and figures from the worlds of sport, politics, business and the media could congregate. DB SCHENKERsportsevents had 100 per cent responsibility for all logistics activities at the site. As the exclusive logistics partner for the German house at Rio 2016, DB SCHENKERsportsevents planned and performed everything connected with the logistics pertaining to this traditional hub for meetings and mingling at the event.

As the official logistics partner of the Olympic teams from Austria, Norway, Portugal and Switzerland, DB Schenker made use of its respective national offices to make sure that the athletes' equipment made it to Rio on time. Similarly, DB Schenker staff in China, Japan and South Korea played a role in transporting television equipment from these countries, while employees in Singapore organised the transportation of the Singaporean sailing team's boats and other equipment.

Following the end of the Rio Olympic and Paralympic Games, the work of DB SCHENKERsportsevents continues. Once the television broadcasts stopped and after the last athletes embarked on their homeward journeys, the logistics specialists spent about two months working on returning and forwarding the items sent to Brazil for the Games.

A race between racing events

Sometimes, races are just one week apart, a week during which the racing team needs to have a new home built for them at their next destination. When the MERCEDES AMG PETRONAS drivers, cars, mechanics and other team members arrive for the new racing challenge, their motorhome needs to be ready and waiting for them.

In other words, everything has to be dismantled, loaded and transported to the next destination in the shortest time possible. It's the logistics provider's very own race between races. The moment the equipment arrives, 18 experts set to work in several shifts to complete the motorhome's construction in around 36 hours. Every step of this process has to run completely according to plan so that the construction team can hand over the keys on time.