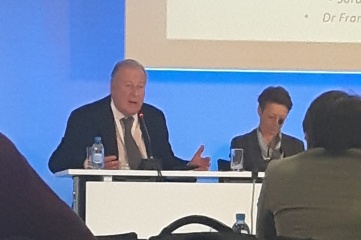 Appointing a new president and amending statutes are important steps for FIFA but a change of culture will be essential for significant transformation, the independent chairman of the 2016 FIFA reform committee Dr François Carrard told HOST CITY.

“By passing the reform of its statutes at the Congress in February in Zurich, I think FIFA has achieved a very important step towards substantial reform. In my opinion, together with the election of the new president, this it is to be considered as the starting point of a reform process,” Carrard told HOST CITY at SportAccord Convention in Lausanne.

“But I think it’s a starting point also for what is essential in my opinion, which is a change of culture.”

Carrard also spoke on a panel at the LawAccord conference during SportAccord Convention, where he shared his experiences of working with FIFA throughout criminal investigations.

“I have been observing from inside in the last months the ‘schizophrenic’ work of the various institutions involved in the FIFA scandals. There were the internal institutions – I started working under president Blatter, when I wanted to report to him the police were there, then I had Ayatou, then I finished with Infantino.”

“As independent chairman I haven’t been involved deeply in FIFA organisational structures before, but my personal experience of president Infantino is such that he is the right man,” he told HOST CITY.

“I think with a new leadership, with adjusted statutes, the path is now there to achieve but any reform process takes time.

“You cannot expect that in a couple of months you solve everything. But at least now the door is open for progress.”