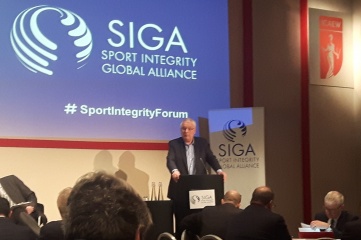 HOST CITY: The 2018 European Championships is taking place in two cities simultaneously, Berlin and Glasgow. How will live audiences in the cities how will they feel like they are at the same event?

Svein Arne Hansen: They will feel it very well. It is a really good programme that brings all the sports together and this is the same for Glasgow and Berlin.

I am very used to this; I come from a winter sports nation, Norway. Every weekend in the winter, different sports go on throughout the whole day in different places in Europe, but the guys sitting in front of the television don’t really care where it is.

My understanding is, and I feel from the meetings we have had, that Glasgow and Berlin are working very well together and hard together to make this a big success.

HOST CITY: In terms of the European Championships brand, what is being done to make sure that it’s experienced as a single brand?

Svein Arne Hansen: That is what we are working on the final layout now, that is one of the things we will discuss on 7 February and for sure later this year. Because we have to look alike and be the same.

For example, we will have a medal table that will be combined between the two places. Victory ceremonies will be exactly the same in the two places. We are working to have it look as much as the same.

In the future this championship will probably be in one place. But for the moment we are happy to have two such interesting host cities.

I am impressed by Glasgow and the way they are really taking all the sports on board. And of course Glasgow organised the Commonwealth Games in 2014, which was a huge success. Athletics will also come back to Glasgow with the European Indoor Athletics Championships in 2019.

For the moment we are working to try to integrate the two cities so it’s a lookalike for the people sitting in Switzerland, in Norway or here.

HOST CITY: How challenging is it to schedule without programming clashes?

Svein Arne Hansen: It is challenging in one way, but also we have gone into this because we don’t want anything to overlap over the afternoon/evening sessions. That’s a must from European Athletics; that we have no other interference from 6.15PM to 9PM from other sports in those days.

This is a 10-day event we are not accepting any overlap at those times from day one. We have to look after our sport. We are about to solve that now so I don’t think that will be a problem.

The scheduling is going very well. I don’t know how official this is yet, but we are coming out with a very good schedule for each sport and every sport should be recognised.

That’s what we are going to discuss the final layout of the timetable at our next meeting.

HOST CITY: What is your feeling about how the people of Glasgow reacted, responded and embraced the Commonwealth Games in 2014?

Svein Arne Hansen: You see now the fantastic interest there was for that Commonwealth Games. The athletics there was very good. There’s unbelievable interest for athletics in Great Britain.

I really hope in the future some time we can come back with an outdoor event in the summer in Glasgow. I am very impressed by Glasgow, the people, the city and the effort they are doing.

They are always willing to find solutions. They are innovative, are open for ideas, because we have to make changes to our sport.

As IOC President Thomas Bach said a year ago, “you have to change or somebody will change you”. Glasgow is really on to it and taking on this big job with several sports all together and it’s a really massive effort. We are very impressed.

HOST CITY: Athletics has clearly had a difficult time recently and you have been very vocal about the need to clean the sport and its administration.

Svein Arne Hansen: We have difficulties. We have the Russian problem with the state-sponsored doping, which is unbelievable, at least for me, that something like that can happen.

But we saw the fantastic championships in Amsterdam this summer, which sold out the five days and not a single person asked “why are the Russians not here?”. Not a single one asked me that.

It was the same with the Olympics in Rio. OK, they were not there, but nobody really missed them because they had not been following the rules that everybody else has to follow.

HOST CITY: What do you think Russian Athletics thinks about this?

Svein Arne Hansen: They are starting to think along the same lines because they know that they have to change otherwise they will not be coming back.

HOST CITY: And you have established a taskforce to look into the integrity of athletics by investigating European records.

Svein Arne Hansen: Yes, we have put on a group to work on that and it was amazing, the reaction on social media.

This is a very difficult task. The taskforce now has until September/October to come back with proposals we will bring forward to the IAAF.

It’s a challenge, of course. People will feel offended but if we don’t do that, people will say you can’t just let it go on. You have to look into it. Of course some people will be hurt by this, but you can’t make an omelette without breaking the eggs.

Svein Arne Hansen: I hope so. We will take this decision about European records, but I am sure the IAAF will follow. We have talked to them already and they have been very supportive of this and put one of their best people on the taskforce. So that’s a good sign.

HOST CITY: Another thing that put the IAAF under the spotlight is the host city process for the World Championships.

Svein Arne Hansen: I was not around [on the IAAF Council] then then so I don’t know too much about that. I have heard the same rumours.

HOST CITY: There is an ongoing host city selection process for the 2022 European Championships. Presumably that host will be announced at your board meeting in November?

HOST CITY: Remind me what bids you have on the table?

Svein Arne Hansen: We have a lot, but I can’t say any more. There will probably be a statement after our board meeting on February 7. We plan to come out with participants for the final round. We are looking for two or three cities to be shortlisted.

We also have made a very tough selection for the sports. If they don’t bring their best people to the Championships in 2018 in Glasgow they will not unfortunately be a part of 2022.

We know all the best athletes will be in Berlin. Swimming are saying the same and they know that all the best swimmers will be in Glasgow, all the sports in Glasgow must also come with their best. Glasgow is not investing so much money to have a second-class Championships.

HOST CITY: But all of the seven sports will remain for 2022?

Svein Arne Hansen: It looks like it. But as I said they must bring their best people. It’s also important that they include a sport that is popular for the host city.

HOST CITY: So that suggests there might be some changes?

Svein Arne Hansen: Yes, there might. But we will see. First we have to organise 2018.