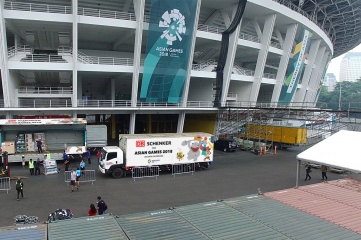 DB Schenker is proud to have been the official logistics provider for the host broadcaster of the Asian Games 2018. Held in Jakarta and Palembang, Indonesia, from 17 August to 2 September, the Asian Games 2018 is the second largest international sporting event after the Olympics. Some 45 nations participated in 463 events – covering 40 sports in various venues between the two cities.

Sports Events Logistics experts at DB Schenker from more around 16 countries worked hard behind the scenes to transport broadcasting and stationary equipment to Indonesia, so that audiences at home around the world could support their country’s athletes live on television during the 2018 Asian Games.

In early 2018, PT Schenker Petrolog Utama (DB Schenker Indonesia) and DB Schenker Sports Events Germany were appointed by the International Games Broadcast Services (IGBS) to handle the temporary importation and re-exportation of broadcasting equipment for the Asian Games in Jakarta and Palembang.

This meant nothing less than taking on the responsibility of ensuring millions of viewers worldwide would be able to enjoy Indonesia's largest international sports event to date.

The first time Indonesia hosted the event was in 1962, the country and the whole media environment was much different back then. The 2018 Asian Games were originally slated to be hosted by Hanoi, Vietnam, but the country backed out from the appointment after stating concerns over costs.

Our logistical tasks included bringing in all the technical equipment needed for an International Broadcast Centre set up at Jakarta Convention Centre in Senayan, Jakarta, from where the broadcasting signals of the Games were spread across the world – as well as handling the deliveries and pickups for the various broadcasters from each of the participating nations in the 43 venues where competitions were broadcast live.

IGBS were very careful in choosing a good partner to do this. This is equipment coming from four continents, it was more than 2.600 single pieces and cases, all very sensitive electronic appliances and we did the whole thing door-to-door: pick up in the origin country, importation into Indonesia, customs clearance duly and in time, delivery up to broadcasting compound and respectively backwards on the re-export after the Games are finished.

Without a dedicated team working around the clock for months in the preparation and then again months in the execution, this would not have been possible.

With fully chartered cargo airplanes and many other regular scheduled flights that successfully landed between early July and mid-August at Soekarno-Hatta International Airport, the DB Schenker Indonesia team carried several hundred tons of broadcasting equipment owned by IGBS and other independent broadcasting companies from all over the world. This included equipment that had been used for the FIFA World Cup in Russia earlier this year.

Several shipments were also delivered by ocean freight to the Jakarta International Container Terminal. In major international sports events such as the Asian Games, time constraints are a common challenge faced by logistics companies.

Indonesia was very enthusiastic about hosting this event and it was a great success in the end. However, getting there was a wild ride on a rollercoaster of arrangements and back and forth with authorities and regulating bodies. Never had so much broadcasting equipment been brought in and out of the country in such a short period of time, so there was no one with a track record or a blueprint of how to do it. As everyone that has been around in the country for a while can tell, sometimes the simplest endeavour can turn into a most adventurous undertaking and usually, certainties are not part of the equation. Organizing this logistics project went in pretty much the same style: until everything was set up, no one could really tell how it would work out in the end.

But the experience that often in this country, the last minute before a deadline is the most powerful leverage for many things to start moving into the right place, allowed us to maintain the typical faith and calmness that are hard to explain to outsiders.

Once again, Indonesia has proven to the world and each and every one of us that here, everything that is seasoned with the right portion of patience, creativity and endurance, can turn into a success.

DB Schenker is Silver Sponsor of Host City 2018, where Future City Mobility and Event Logistics is one of many exciting agenda topics