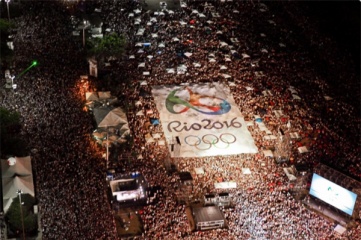 Rio 2016 is building its own visual identity (Photo: IOC)

At each Olympic Games, the rings are seen alongside a new and exciting visual identity, or look of the Games, which is unique to each host city and provides every Games with its own distinctive flavour

The Olympic rings have been a constant presence at each Games since 1920. But while they provide a symbolic continuity from one Games to the next, each edition also features its own distinctive identity – from the modern and youthful vibe of London 2012 to the patchwork quilt of Sochi 2014 – which provides an eye-catching backdrop to the sporting action and adds to the visual spectacle of the Games.

The task of creating this unique Look of the Games – which is seen everywhere from signposts and souvenirs to venues and volunteers’ uniforms – falls to the Organising Committees of the Olympic Games (OCOGs), which seek to produce a visual identity that is built upon the foundation of the Olympic rings, while also incorporating designs and colours that reflect the culture and history of the host city.

For Alison Gardiner, who was the Vice President of Brand and Creative Services at the Vancouver 2010Organising Committee, it was important to have the rings as a strong starting point for this huge task.

“The Vancouver 2010 brand strategy drew from the Olympic brand as well as Canada’s, and this combination provided the foundation for everything we did,” she explains. “Our goal was to ensure there was one integrated, powerful experience that was unique to our country and our time, and could also engage and inspire as many people as possible.”

However, building a visual identity around a globally recognised symbol, which already has so many values and meanings attached to it, can also present challenges for OCOGs.

“We couldn’t get away from the fact that as soon as we put the rings on something, there was immediately an association with something great and powerful and a standard of Olympic excellence that we had to live up to,” says Gardiner.

“But the Olympic brand is also incredibly inspiring to work with because of what it stands for – just the symbol on its own, everyone on the planet recognises it and associates it with excellence and bringing people together in celebration.”

According to Beth Lula, Branding Director at the Rio 2016 Organising Committee, another of the challenges for Games organisers is building a visual identity that is representative of the host city and nation, as well as the values inherent within the rings.

“It’s important for engagement,” Lula says. “If you have something that people can recognise and understand, they can feel that it represents them and their nation and they can feel proud of it. When we were developing our brand, we were looking for universal symbols – that’s why we have people embracing as our Games emblem. It’s a global symbol. We want people throughout the country to recognise themselves and feel proud of our designs.”

While the Olympic rings provide a globally recognised symbol for OCOGs to draw on, Lula also believes that each edition of the Games adds something special to the Olympic brand as a whole.

“Every time that the Olympic Games go to another culture, they absorb some aspects of that culture and that’s what really makes the Olympic brand global,” she says.

“The Games have never been to South America, so we said throughout our bid process that we would be new territory for the Olympic Games. We have a unique way of celebrating things, we love sport and we are a passionate people with a lot of energy. I think that is going to be something very special that we are going to add to the Olympic brand.”

Lula hopes that what her team is creating for Rio 2016 will live on long after the Games through the rings themselves. “When we return the Olympic rings to the IOC after the Games, they have to be even more valuable than they were before,” she says. “That’s our mission.”

This article was written by and reproduced with kind permission from the International Olympic Committee. For more information visit www.olympic.org