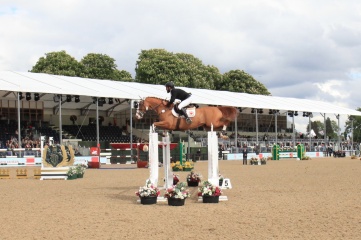 Spurred on with the success of last year’s expansive additions to the equestrian show’s temporary infrastructure in honour of The Queen’s 90th Birthday BAFTA award-winning celebrations, HPower Group once again entrusted Arena Seating and Arena Structures to deliver and maintain the same level of high-quality hospitality and finish this year.

At the south end of the Castle Arena, two Members Enclosure viewing areas were installed by Arena Structures utilising the curved Arcus roofs to offer 250m² of premium sightlines. Situated behind, a multi-deck temporary Members Restaurant, provided 600m² of contemporary dining and hospitality restaurants and lounges.

Throughout the Royal site, an additional 800m² of Arcus structures played host to the Windsor Enclosure Bistro, Reception Structure, and the Royal Entrance Structure. Peaked roofed Aluhall temporary structures were home to the Stirrup Cup Kitchen, the Riders Lounge and the Members Kitchen.

Merchant said: “It was key this year for HPower Group to keep building on the precedence set at last year’s royal celebrations, so it was our pleasure to work with the organisers once again, ensuring the high-profile show excels its reputation of consistently delivering world-class sporting event environments at the highest level.”

Nick Brooks-Ward, projector director, added: “We have worked with the Arena Group for many years, we use them because we can be assured that they will provide the high levels of service and quality of product that we expect for an event as prestigious as Royal Windsor Horse Show.”