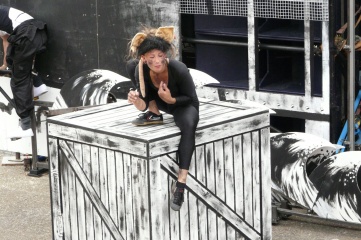 [Source: Glasgow 2018] A fund of up to £750,000 has opened to artists, arts organisations and groups who want to apply to be part of the Glasgow 2018 European Championships’ cultural festival.

Festival 2018 is part of the biggest sporting event hosted in Scotland since the Glasgow 2014 Commonwealth Games. Co-hosted with Berlin, Glasgow 2018 is multi-sport event to be staged from 2 to 12 August 2018. It brings together the existing European Championships for Aquatics, Cycling, Gymnastics, Rowing and Triathlon along with a new Golf team championships. Berlin will host Athletics.

More than 3,000 of the best athletes on the continent will compete in 12 venues across Scotland including Glasgow, Edinburgh, Loch Lomond and The Trossachs, North Lanarkshire and Perth & Kinross.

Applications are invited from all art-forms including music, visual art, theatre, dance, film, literature and performance to showcase the best of Scotland’s cultural offer. Glasgow’s George Square and the Merchant City Festival will be at the heart of Festival 2018 alongside communities close to the venue areas.

The fund opened on Tuesday 25 July 2017 and closes on 6 September 2017. Applications can be made at www.glasgow2018.com/festival2018/fund. Applications will be considered in terms of quality and impact and how they reflect the European context and Glasgow’s close collaboration with co-host Berlin, the 2018 Year of Young People and the way in which arts and culture can reference and link to sport through physical movement.

The Glasgow 2018 European Championships is delivered in partnership with several leading European sports federations with support from the Scottish Government and Glasgow City Council.

Culture Secretary Fiona Hyslop said: “The European Championships 2018 Cultural Festival offers an excellent platform to strengthen connections both at home and internationally. Scotland has a reputation for being a vibrant and culturally-rich nation and everyone here for the Championships will be able to sample some of this for themselves.

“As we look towards 2018 and the Year of Young People, there will also be a programme of events and activities celebrating Scotland’s many unique qualities as a great place to grow up and mark our young people’s important contribution to society. This Festival Fund will help to create new and valuable experiences for visitors and those who live here and I’m delighted to welcome this important part of the European Championships 2018.”

“This fund reflects our commitment to that sector and will help deliver a programme of activities at Glasgow’s iconic George Square; the Merchant City Festival, and many more venues across the city next year.”

Tickets for sporting events are now on sale and can be purchased from www.glasgow2018.com/tickets. Tickets are being sold on a first come first served basis, with fans encouraged to book early to avoid disappointment.