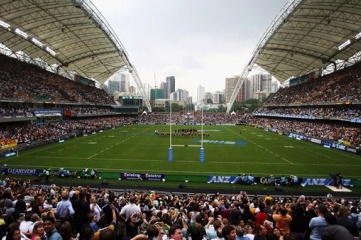 As the expression of interest deadline closed on February 28, 25 Unions formally confirmed their interest in hosting a round of the HSBC Sevens World Series from the 2015/16 season. Fourteen Unions are also interested in hosting the men’s and women’s Rugby World Cup Sevens in 2018.

The level of interest underlines the global appeal of the newest Olympic sport. IRB Chairman Bernard Lapasset said: “This unprecedented response truly reflects the enormous prestige and appeal of Rugby Sevens in the global sporting market place ahead of our Rio 2016 Olympic Games debut.

“The submission features a blend of interest from every continent and includes existing and emerging Rugby markets. It reaffirms Rugby Sevens as a young, exciting and thriving sport that is reaching out, engaging and inspiring new audiences around the world.

“We look forward to collaborating with each interested party as we look ahead to the next phase of the process.”

The deadline for tender submissions for Unions interested in hosting Rugby World Cup Sevens 2018 need to submit tenders by 5 December 5 2014, with the IRB Council selecting the winning bid at its May 2015 meeting.

The deadline for formal tender submissions for hosting a Sevens World Series tournament is set for 27 June, 2014 and the 2015/16 Series hosts will be selected by IRB EXCO in October 2014.

The dual process follows a detailed strategic review of Rugby World Cup Sevens and the Sevens World Series hosting models and key overall considerations include growing hosting and participation opportunities for the 119 IRB Member Unions, tournament format, increasing Sevens-related global commercial model values, and for the series specifically, the number of events in the calendar.