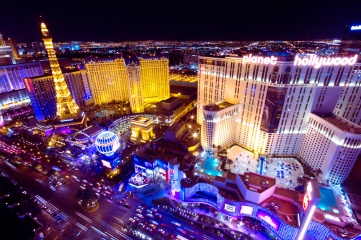 Formula One chief executive Bernie Ecclestone has revealed talks have been held over adding a street race to the motor racing series’ calendar in Las Vegas, while Madrid has also been linked with hosting a race.

F1 failed to secure the necessary backing to make the temporary track developed in the car park of Caesars Palace in Las Vegas a permanent fixture on its calendar following races in the US city in 1981 and 1982.

Hermann Tilke, the designer responsible for the majority of new circuits developed for Formula One in recent years has made numerous recent visits to Las Vegas with a view to developing a race venue, according to UK newspaper the Independent, and Ecclestone is set to hold discussions over adding a second US race to the F1 season on his way to next weekend’s United States Grand Prix in Austin, Texas.

“There is a consortium in Las Vegas that wants to arrange a race. They are very serious and want me to go out there on the way to Texas so we will see,” he told the Autoweek.com website.

Ecclestone added that casino impresario Steve Wynn and Cirque du Soleil co-founder Guy Laliberte - both counted by the 83-year-old as personal friends - are not members of the interested consortium.

As opposed to the USA, where home-based motor racing series such as Nascar and IndyCar hold sway, Spain represents an important market for F1 following the rise of Fernando Alonso and, according to the El Confidencial newspaper, Ecclestone is also in negotiations with a group of businessmen to stage a street race in the country’s capital.

El Confidencial added that the F1 chief has received bank guarantees and a detailed business plan. The proposed race would rely exclusively on private funding, and the group aims to secure financial assurances and Ecclestone’s backing ahead of going before the local authorities.

Barcelona’s has staged the Spanish Grand Prix since 1991, with its contract running through until the 2016 season. Spain staged two races per season between 2008 and 2012, with the European Grand Prix held on a street circuit in Valencia.

The additions of new races in consecutive years in Mexico City and Baku means Formula One is set to have 21 rounds by 2016.