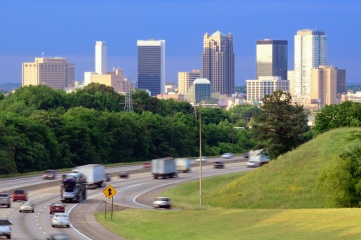 Skyline of Birmingham, Alabama from above Interstate 65

The 2021 World Games is set to return to the USA for the first time, with designated host city Birmingham Alabama anticipating major economic and social benefits

The Executive Committee of the International World Games Association has chosen Birmingham, Alabama as the host city of the 2021 World Games.

The decision was announced on Thursday at a press conference in the Mövenpick Hotel in Lausanne,

Birmingham beat off competition from Lima in Peru and the Russian city of Ufa.

The decision was made after the delegations’ final presentations to the IWGA Executive Committee at the International Olympic Committee headquarters.

"All the bids we received were of very high quality, and it was not easy for us to reach a decision,” said José Perurena, President of the International World Games Association.

“We have to deliver nothing less than outstanding World Games. We are convinced that Birmingham will exceed these expectations.

“We are happy to showcase our sports in Birmingham in July 2021, and we are sure that we will be offered optimal conditions for our sportsmen and women there.”

Perurena also hailed Birmingham’s organisational skills and the support of the city administration and the National Olympic Committee.

Birmingham Council President Johnathan Austin said "The city of Birmingham will make the World Games 2021 the best World Games that you all have seen."

The decision is subject to “successful negotiation of contractual conditions” and the agreement with the host city will not be signed until the close of the Annual General Meeting in April 2015.

Birmingham, the largest city in Alabama, has never hosted an international multi-sports event before.

The Greater Birmingham Convention and Visitors Bureau is anticipating that hosting the 2021 World Games will bring an economic benefit of more than US$250m from visitors to the city.

The cost of hosting the Games has been forecast to be US$75m, which will raised from public and private sources.

The World Games is a quadrennial and multidisciplinary sports event under the patronage of the IOC, showcasing more than 25 sports including Gymnastics, Squash, Tug of War, Sumo and Roller Sports. About 4,500 athletes and officials from approximately 100 countries take part.

The World Games has not been to the USA since the inaugural edition in 1981 in Santa Clara, California.