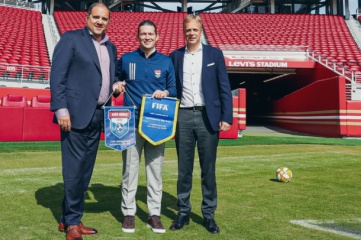 [Source: Bay Area 2026 Host Committee] Over the weekend, the Bay Area 2026 Host Committee successfully completed its scheduled visit from the FIFA host city inspection delegation as part of the continued efforts to bring the FIFA World Cup 2026 to the Bay Area. Making its first and only in-person visit to the Bay Area ahead of the official host city selection announcement expected in early 2022, the delegation consisted of nearly 30 international football executives from FIFA, Concacaf, U.S. Soccer, and the Canadian Soccer Association. FIFA’s delegation was led by Concacaf President and FIFA Vice-President Victor Montagliani and FIFA Chief Tournaments & Events Officer Colin Smith.

“The Bay Area 2026 committee was honored to host these two gentlemen and their delegation and have the opportunity to make our case to bring the world's largest tournament to the San Francisco Bay Area and Levi's Stadium. I'm unbelievably proud of the support we have received from throughout the state of California,” said Al Guido. “Having the three mayors of our large cities – San Francisco, San Jose, and Oakland – participate in our presentation demonstrated the strong support we have received throughout the nine counties of the Bay Area. Led by our honorary chair, Dr. Condoleezza Rice, we have tremendous leadership in this community, both in the public sector and in the private sector.”

“The Bay Area 2026 Host Committee stands on the shoulders of 10 Bay Area companies alongside the 49ers to join our starting 11,” said Patricia Ernstrom, Bay Area 2026 Executive Director. “They are our starting 11 because our effort to build the necessary private support for this event is just getting started. Staging an event like this requires tremendous private support and there are 38 Fortune 500 companies in the Bay Area, representing nearly 2 million employees and $11 trillion in market cap. We truly believe we are ready to be selected as one of the hosts for FIFA World Cup 2026.”

On Saturday, a tour of Levi’s Stadium – the premier outdoor sports and entertainment venue on the West Coast and award-winning home of the 49ers – highlighted the final day of the FIFA inspection visit. In alignment with FIFA’s priorities, the tour focused on the facilities specific to player performance such as the locker rooms, pitch, and related infrastructure. Already providing a high-quality natural grass playing surface, Levi’s Stadium management has confirmed their intent to work with FIFA on implementing their new pitch profile in advance of potential matches in 2026. Beyond the stadium, other stops included key locations where FIFA events – such as team training sites, team base camp locations, FIFA Fan Fests – could be held from Oakland to San Francisco to San Jose to Santa Clara.

“It is an important thing that our incentives are aligned with FIFA as it pertains to the pitch and player health and safety,” said Al Guido. “We've hosted international soccer matches, which do not let you play on a turf surface. We all know grass surfaces are healthier than turf surfaces and that’s the reason why we make the investment to have one of the best, not just in the Bay Area, but within the NFL.”

The Bay Area 2026 Host Committee also made a point of showcasing the rich Bay Area history of hosting major soccer events dating back to FIFA World Cup 1994 and FIFA Women’s World Cup 1999. The region’s diverse communities, residents, and culture were also celebrated as factors in support of its suitability to host the event, along with its consistently temperate climate that is especially beneficial to sport in June and July – the months in which FIFA World Cup would take place.