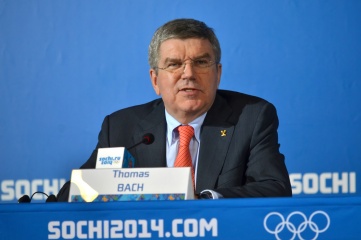 Beijing, which staged the 2008 Summer Olympics, is up against the Norwegian city of Oslo and Almaty in Kazakhstan for the right to host the 2022 Games, with the IOC set to select the host city on July 31, 2015.

The second edition of the Summer Youth Olympics will conclude on Thursday, and Bach told the Xinhua news agency that Nanjing’s organisation of the event had been “seamless”, echoing the thoughts of Chinese IOC member Yang Yang, who said that Nanjing’s success would lift Beijing’s hopes of becoming the first city to stage the Summer and Winter Olympics.

“Of course it can help,” Bach said. “Nanjing has shown again the excellent way in which China has been able to organise a big event, as well as the friendliness and hospitality of the Chinese people.

“It is a good showcase for China and will, of course, support Beijing’s bid.

“The organisation here [in Nanjing] is flawless. We haven't had any kinds of problems to solve so we have just been able to enjoy the Games with the athletes, the volunteers and the people of Nanjing.

“It has been a great combination of friendliness and efficiency at the same time. If you have the two together, you are guaranteed to have a successful Games.”

Former IOC President Jacques Rogge said earlier this month that, if Beijing were to be awarded the 2022 Games, he is sure they would “do a very good job”.

Bids for the 2022 Winter Olympic Games will be among the topics discussed by IOC Vice President Sir Craig Reedie and others at the HOST CITY: BID TO WIN conference, which will take place in London on 28th October. Visit www.bidtowin-hostcity.net for more information.