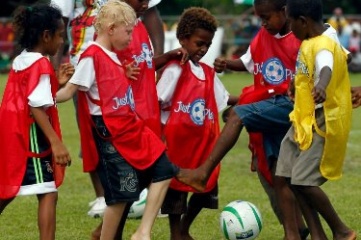 The Commonwealth Games Federation (CGF) is working with the Commonwealth Secretariat and the United Nations Children’s Fund (UNICEF) to deliver a dynamic and inclusive programme of athlete and public engagement activities at the upcoming Samoa 2015 Commonwealth Youth Games, the CGF announced on UN International Youth Day on Wednesday.

The new initiatives will help fulfil the Games’ ambition to celebrate high-performance sporting competition, personal development and new Commonwealth friendships made on the level playing field of sport.

“We’re thrilled to be joining forces with the Commonwealth Secretariat and UNICEF to enable innovative projects at this year’s Commonwealth Youth Games which will engage, inspire and support our young Commonwealth athletes and young Pacific Island hosts,” said CGF Chief Executive David Grevemberg.

“In line with our strategic ambitions, we hope the programme will have a lasting impact, recognising our young Commonwealth citizens as essential to achieving sustainable human development.”

Workshops for young athletes will take place each day throughout the Games, delivered by representatives from the Commonwealth Youth Sport for Development and Peace (CYDSP) working group, a network of young sport and development leaders from across the Commonwealth.

“The opportunity for participants at the Games to learn more about how sport can be used as a tool for development is another example of the important role the Games movement can play in promoting the Commonwealth and our shared values,” said Oliver Dudfield, Head of Sport for Development and Peace at the Commonwealth Secretariat.

Alongside the workshops, Just Play fan zones be set up for young locals, visitors, athletes and officials to participate in interactive games and activities.

Just Play, an Oceania Football Confederation programme, is developed in partnership with UNICEF, the Australian and New Zealand governments, the UEFA Foundation for Children and the Football Federation of Australia.

“Within the Pacific, since the programme’s inception in 2009, Just Play has attracted more than 200,000 girls and boys to engage in physical activity and learn healthy lifestyle habits and self-confidence. The

The Commonwealth Youth Games will bring together up to 1000 young athletes aged 14-18, who will represent their country and compete for 107 Gold medals in 9 sports on the island nation of Samoa from 5-11 September 2015.