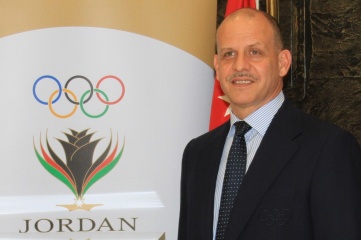 Concerned over national health and social wellbeing, the Jordan Olympic Committee has initiated a campaign to get people more involved in sport

Concerned over the Kingdom of Jordan’s collective health and what it describes as “the continuous threat of our young people falling victim to damaging and anti-social distractions”, the JOC has launched a series of initiatives under the banner of “Living Sport” with the aim of making sport play a part in the lives of all Jordanians.

The programme was launched on Thursday during celebrations held in Al Hussein Sports City in advance of Olympic Day (23rd June). The JOC was joined by representatives from all 34 sporting federations under its umbrella, as well as 200 school children who took part in activities promoting Living Sport and the Olympic values.

The programme is set to run indefinitely. “There is no end date to sport making a difference to the lives of our citizens and so Living Sport has no end date,” said Prince Feisal.

A one-month campaign will be launched every year on Olympic Day to address key health and social issues. Specially created JOC committees will promote sport as universal and without barriers to participation, and organized in an environment-friendly way through green initiatives.

Living Sport will target six to 11 year olds through an “Ambassador” initiative, steering children away from anti-social distractions by bringing fun into sport.

Through the JOC News Service, sporting successes will be celebrated, bringing a sense of collective national pride. The JOC is also taking steps to make sport more marketable and attractive to all non-participants, from fans to sponsors.

“Living Sport is a long-term programme which will be at the heart of all JOC activity and operations, and which will evolve as needed through time to remain relevant to all that we do,” said Prince Feisal.