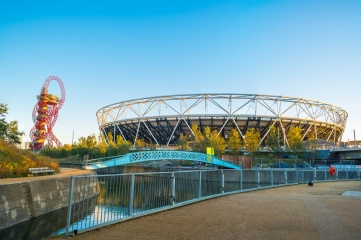 VINCI Stadium has been appointed to manage the former Olympic Stadium at London’s Queen Elizabeth Olympic Park for a 25 year period, starting before the England 2015 Rugby World Cup.

The deal with London is VINCI’s first stadium contract outside France.

The contract was awarded by E20, a joint venture between the London Legacy Development Corporation and Newham Council.

“The E20 Stadium LLP awarded the contract to run the former Olympic Stadium to VINCI Stadium in recognition of VINCI's expertise and the business model it has developed for the operation of multi-purpose arenas, including the Stade de France,” said Pierre Coppey, Chief Operating Officer of VINCI.

“In addition to broadening the range of events offered at this amazing venue, VINCI Stadium will work with the E20 Stadium Partnership to develop and revitalise East London for the benefit of citizens.”

The venue, designed by Populous in a modular way that enables it to be repurposed for legacy use, is currently being transformed into a multi-use stadium.

“This marks another step forward in the long-term future of the Stadium. VINCI have a great track record and a wealth of experience in managing world-class venues,” said David Goldstone, chief executive of the London Legacy Development Corporation.

“We are looking forward to working with them and delivering a multi-use stadium capable of hosting a range of different sports and events, including this autumn’s Rugby World Cup.”

The stadium will host five matches of Rugby World Cup 2015, starting with France vs. Romania on 23 September and ending with the bronze final match on 30 October.

The venue will not fully reopen until 2016. Premier League football club West Ham United are to take up tenancy of the stadium, which will also act as the national competition venue for UK Athletics.

VINCI Stadium currently operates a network of stadia in France including the Stade de France in Paris, the Allianz Riviera in Nice, the New Bordeaux Stadium and the MMArena in Le Mans.

The Olympic stadium is currently being transformed into a multi-use venue. It will host five matches of Rugby World Cup 2015 before fully re-opening in 2016 when it will become the home of West Ham United.

“Managing the basic day-to-day operations at a Premier League football stadium is a unique challenge, so we will be passing on our extensive experience and expertise to Vinci to ensure they provide the same high levels of service our supporters have become accustomed to at the Boleyn Ground,” said Karren Brady, vice-chairman of West Ham United.

“While Vinci will manage the functional aspects of the matchday operation, we will still be overseeing the overall supporter experience to make sure watching West Ham remains one of the very best days out in the Premier League.”

"The Olympic Stadium will be the new home of British Athletics, staging a wide range of events from mass participation runs to elite track and field meetings,” said Ed Warner, chairman of UK Athletics and London 2017.

“We look forward to working closely with VINCI to deliver all of these events, and in particular the twin World Championships in the summer of 2017, in London's most iconic sporting venue."

As well as running the stadium, VINCI will manage the London Marathon Charitable Trust Community Track and events on the south park lawn, below the ArcelorMittal Orbit.

They will also work with the E20 Stadium Partnership to promote sport and healthy living in the local area and deliver mass participation events such as the Great Newham London Run.

“This is more good news in our goal to deliver a long-lasting legacy from London’s Olympic and Paralympic Games,” said Boris Johnson, mayor of London.

“VINCI is a world-class operator and set to be a key partner in the creation of a spectacular stadium offering a dynamic range of sport and attractions for Londoners to enjoy.”

5,500 tonnes of steel and 6km of cabling are being used in the transformation of the stadium. The 14 floodlight panels were removed to make way for the new roof.

During renovation, the existing running track is being protected by a 75cm deep mat of recycled concrete.

The rebuilt Olympic Stadium will include 21,000 retractable seats, which are said to allow closer pitch-side viewing during football matches while allowing the running track to remain in place.

Alongside the main stadium, a new floodlit 400m community athletics track, funded by the London Marathon Charitable Trust will be built for use by the local community, schools and will host a resident athletics club – the Newham & Essex Beagles.

Mayor of Newham Sir Robin Wales said “We look forward to working with VINCI to ensure the Stadium is a world class visitor attraction that delivers job opportunities, community benefits and increased sports participation that transforms the lives of those living in London’s East End, but especially the residents of Newham.”