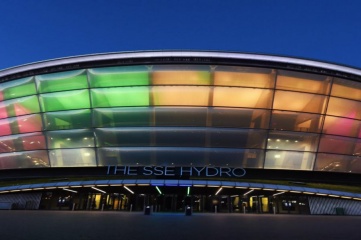 When some of the best gymnasts in the world step up to show their remarkable talents as they aim to strike gold, this city landmark will continue its reputation for attracting the finest competitors and most exciting competitions in the sport.

As a venue for the 2015 World Gymnastics Championships and the 2014 Commonwealth Games, the stunning SSE Hydro has witnessed plenty of special sporting moments over the years and will be the place to be for gymnastics fans when the Championships are in full swing. You can make sure you’re there to see champions crowned by getting your tickets here.

Aside from its record of holding unforgettable sporting events, the SSE Hydro, which has provided a stage for some of the biggest stars of music, has also been recognised by Pollstar as the second busiest live entertainment arena in the world.

But, soon enough, the spotlight will be back on athletes’ show-stopping routines.

Glasgow 2018 sporting ambassador Max Whitlock will be looking to continue a fine record when he returns to Glasgow, after clinching first place in the pommel horse two years ago and a medal haul including three golds at 2014’s Commonwealth Games.

The same event also brought success for Brit Claudia Fragapane, who became the first Englishwoman to win four golds at a single Commonwealth Games in Glasgow.

And Scotland's Dan Keatings was also on the podium, securing a gold and two silvers in front of a home crowd.

Away from the GB stars, the SSE Hydro has also been the location for incredible performances from athletes coming from further afield.

At the Worlds in 2015, Greece’s Eleftherios Petrounias wowed to come out on top in the men’s rings, while, among the other highlights, Romanian favourite Marian Dragulescu, a four-time world champion, took silver on the vault.

With just months to go until Glasgow 2018 gets underway, many of those hoping to write their name in the history books have already had their say on competing somewhere that those in the sport know so well.

Sporting ambassador Max said: “I’m really excited about Glasgow 2018 – it is always great to compete at a multi-sport event and I have always loved it here in Glasgow. The crowd is always amazing and give you that extra lift. It can make such a difference to your performance out there on the podium.

“I witnessed that first-hand during the 2014 Commonwealth Games and again at the World Championships the following year. So I have no doubt that Glasgow 2018 will be a huge success.”

Claudia also can’t wait to return to a venue that holds special memories.

She said: “The atmosphere was just breath-taking. There was a lot of pressure because everyone wanted us to do well. We wanted to do well and we knew we could do it so to get that massive roar from the crowd helped us with each performance. It will be amazing to go back to Glasgow – the city has such a special place in my heart.”

And Nile Wilson, who won team silver in the 2015 World Championships in Glasgow, added: “The SSE Hydro has hosted some of the greatest moments of my career. The home support really, really does make a difference. And obviously we’re now looking forward to next year’s European Championships and I’m really excited at the prospect of competing once again in Glasgow.”