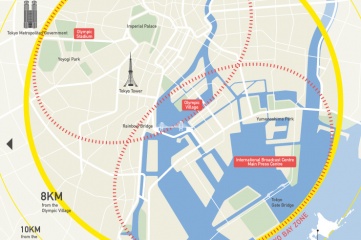 The original plans put the majority of the Tokyo 2020 venues within an eight kilometre radius of the Olympic village.

The Tokyo 2020 Olympic Games organisers are reviewing the locations of their current venue plans because of concerns over the rising costs of the Games.

The organising committee has informed the IOC of possible revisions to the locations of some of the Games venues and organisers are considering moving certain venues into locations in the Greater Tokyo area, some as far as an hour’s drive from the city centre.

The original Tokyo bid promised a compact Games with the majority of the venues located within a five mile radius of the Olympic village, far more condensed than many recent Games. Only the shooting, modern pentathlon and football events were originally planned to be held outside of the five mile Olympic village zone.

The new plans could see some venues being moved out as far away as the city of Saitama which could result in some considerable transportation headaches. However, organisers have insisted that the revised plans would be made possible with improved transport infrastructure whilst still cutting costs. The IOC has previously praised Tokyo's venue layout and have been impressed by the city's progress.

The cost of the Games has been a cause of contention amongst Tokyo’s citizens with protests being held against the new 80,000 seated stadium which will replace the current National Stadium.

Tokyo governor Yoichi Masuzoe has had to defend the new plans and told a press conference at the Foreign Correspondents' Club of Japan that he has a responsibility to Tokyo taxpayers.

“How can I persuade the taxpayers to pay this kind of money? We are working with the IOC and the various sports federations to make the Games sustainable. Legacy is very important. If you abolish everything after the Games who can accept that?” said Masuzoe.