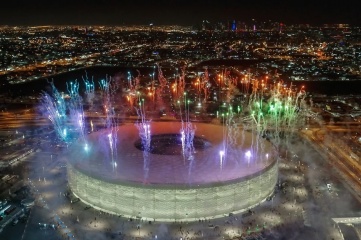 [Source: Supreme Committee for Delivery & Legacy] Qatar reached yet another FIFA World Cup™ milestone on Friday night when Al Thumama Stadium became the sixth tournament-ready venue to be inaugurated.
The stadium follows Khalifa International, Al Janoub, Education City, Ahmad Bin Ali and Al Bayt in being declared ready to host matches during the 22nd edition of the FIFA World Cup™, which will kick off on 21 November 2022. Al Thumama’s inauguration ceremony took place prior to the Amir Cup Final, which was won by Al Sadd, who defeated Al Rayyan 5-4 on penalties after the match finished 1-1 after 90 minutes. The match was held in the presence of His Highness, Sheikh Tamim bin Hamad Al Thani, the Amir of Qatar.
H.E. Sheikh Hamad bin Khalifa bin Ahmed Al Thani, President of the Qatar Football Association, congratulated the Al Sadd board of directors, technical and administrative staff, players and fans for winning the 49th Amir Cup.
Sheikh Hamad said: “Qatar has been a pioneer in hosting major football matches during the pandemic. The inauguration of Al Thumama marks yet another milestone on the road to 2022 and the first FIFA World Cup in the Middle East and Arab world, while providing another opportunity to welcome fans back to the stands as we continue to overcome COVID-19.
“I would like to express sincere thanks and appreciation to everyone in the medical sector for their outstanding efforts over the past two seasons. With their support, we have been able to host a capacity crowd for this evening’s final and send a strong message to the world that we are overcoming this pandemic.”
H.E. Hassan Al Thawadi, Secretary General of the Supreme Committee for Delivery & Legacy, said: “We are incredibly proud to have inaugurated the sixth tournament-ready stadium ahead of next year’s FIFA World Cup. Al Thumama is a very special venue for everyone in Qatar. It pays tribute to an important piece of clothing that is proudly worn by men and boys across the Arab world and its unique design showcases the talent and innovation of our people.”
Al Thawadi continued: “We are now within touching distance of the World Cup. Soon we will pass the one year to go milestone and host the FIFA Arab Cup – which will give us a major opportunity to test all our plans for Qatar 2022. We stand ready and prepared to host a memorable World Cup for the benefit of Qatar, the region and the world.”
Nasser Al Khater, CEO, FIFA World Cup Qatar 2022 LLC, described Al Thumama’s inauguration as another important step on the road to 2022.
“The milestones are coming thick and fast as we get ever closer to the World Cup,” said Al Khater. “The inauguration of Al Thumama is another important step as we ramp up preparations for the biggest sporting event ever to be held in our country and region. We look forward to inaugurating Al Bayt and Ras Abu Aboud before the end of the year, with our eighth and final stadium, Lusail, set to be launched in 2022.”
The 40,000-capacity Al Thumama will host matches during the upcoming FIFA Arab Cup™, which will take place in Qatar from 30 November to 18 December. It will then host eight matches during the FIFA World Cup™ up to the quarter-finals stage. Designed to resemble the ‘gahfiya’ head cap worn by men and boys across the Arab world, Al Thumama was designed by Ibrahim M. Jaidah, who is the first Qatari architect to design a FIFA World Cup™ stadium.
Al Khater said many important lessons were learned during the lead-up to Al Thumama’s inauguration.
“Every major match we organise helps us to fine-tune our plans for 2022,” said Al Khater. “The FIFA Arab Cup – involving 16 national teams from across the region – is yet another golden opportunity to test all our functional areas. In relation to the Amir Cup specifically, we will compile a vast number of lessons learned in the coming days and weeks, particularly in relation to ticketing, Fan ID, travel, health and safety, and others. Every event we organise between now and the World Cup is an opportunity to test our readiness and confirm our plans for the tournament.”