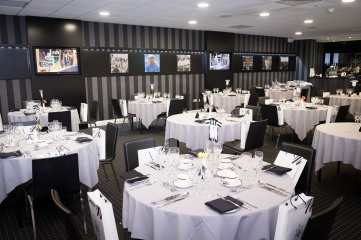 The Sir Bobby Robson Suite holds up to 80 guests and is situated on level 3 of the stadium.

“Sir Bobby Robson held a very special place in the hearts, not just of Newcastle United supporters, but of football fans the world over and this suite is a lovely and lasting tribute to him,” said Samantha Doyle, sales and marketing manager for Sodexo Prestige Venues & Events, which manages conferencing and events at St James’ Park.

Along with the Sir Bobby Robson suite, St James’ Park has one of the biggest banqueting suites in the north east of England, capable of holding up to 1000 guests. Executive boxes with views of the pitch are also available for smaller meetings.

The walls of the suite, which have been lined with images of Sir Bobby from his playing days and managerial career at clubs such as Fulham, West Bromwich Albion, Ipswich Town, PSV Eindhoven, Sporting Lisbon, FC Porto, Barcelona, England and Newcastle United.

St James' Park is the second biggest sports ground in England outside London. Home to Newcastle United Football Club since 1892, the stadium has also hosted international and 2012 Olympic football, as well as concerts from the likes of Bob Dylan and Bruce Springsteen.