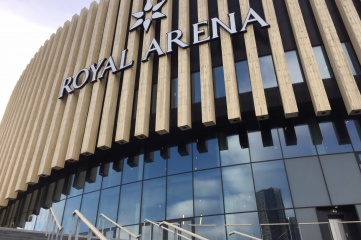 The arena has a capacity of 16,000 capacity for concerts and expects between 60-80 event days per year.

Located in Ørestaden and near to Copenhagen Airport, the Royal Arena has a capacity of 12,500 people at sporting events, the same amount for theatre-style conference settings and 16,000 concert guests. It is also adjustable to create a smaller arena down to 3,500 people and expects between 60-80 event days per year.

Copenhagen Lord Mayor Frank Jensen said: “I’m pleased that the Danish capital is to have an arena so that Copenhagen can hold its own against cities such as London, Berlin, Stockholm and Hamburg. It will give space for many exciting events for Copenhageners and guests.

“The arena will also attract growth to Copenhagen and the greater Copenhagen region as well as even more investment in Orestad.”

The European Short Course Championships will see 800 contestants from 40 different countries and an expected audience of 30,000 during the five days of the championship. The IIHF Ice Hockey World Championship 2018 has also chosen the Royal Arena as its venue.

Carl Christian Ebbesen, major of Culture & Leisure, Copenhagen, added: “The Royal Arena has given us the opportunity to bid on culture and sports events, that we previously lacked the right physical space to host.

“I am pleased that we could get a major event, such as the European Swimming Championships to Copenhagen. Now we can show the rest of the world, what Denmark really has to offer.”