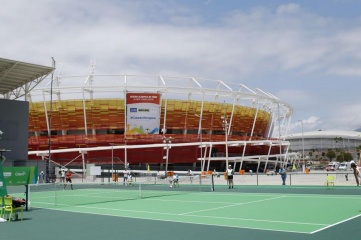 The Olympic Tennis Centre is one of the few structures built for permanent use (Photo: Rio 2016 / Daniel Ramalho)

With just two months to go until the opening ceremony of the Rio 2016 Olympic and Paralympic Games, the host city is “on the cusp” of reaping the same legacy benefits enjoyed by London, according to AECOM, the company behind both cities’ Olympic masterplans.
“Despite Brazil’s current economic and political challenges, the guiding principle has always been for the Games to serve Rio and boost its development, improving the quality of life for all its citizens,” said Bill Hanway, Global Sports Leader at AECOM.
Rio is aiming to stage the world’s best value Olympic Games by reducing public cost through partnership with the private sector, and by delivering a simple and sustainable venue plan that applies many of the legacy planning strategies of the London 2012 Games.
According to the IOC, 75 per cent of capital expenditure relating to London’s preparations for hosting the 2012 Olympic Games was invested in transport and utilities infrastructure, land and water clean-up, public open spaces, new homes, and permanent sports and leisure facilities.
A similar approach has been adopted in Rio. The Games is boosting the development of public transport, with Linha 4 of the metro to Barra, the site of the Olympic Park, due to be completed just in time for the Games.
Power and data facilities installed to cater for 20,000 journalists from the international media will make the Olympic Park one of the best connected districts in Rio.
“The Games are a catalyst for changing not only the city, but the aspirations of future generations. As with London, our approach is to take a long-term view that sees the Games as a milestone in the ongoing legacy programme,” said Hanway.
“The Games and the success of the event are the primary focus, but also serve as a driver for the future. It’s an opportunity to invest in underdeveloped areas and significantly upgrade transport and infrastructure. Rio is now on the cusp of reaping the legacy benefits.”

Parallel lines: Games and legacy masterplanning
For the London 2012 Games, AECOM delivered masterplanning, landscape architecture, engineering and sustainability services. Working closely with its partners at Rio’s Municipal Olympic Company (EOM), AECOM has reprised these roles in Rio with additional responsibility for the preliminary design of the Barra Olympic Park’s sports arenas and detailed design of the International Broadcast Centre.
AECOM’s masterplan for Rio covers a 20-year period, with three distinct phases: preparation for the event; a transitional phase; and the long-term legacy. All phases were planned in parallel to smooth the transition between modes. AECOM points to the layout of roads and the capacity of utilities in the Barra Park, which were designed to cater for the planned residential, educational, commercial and sporting legacy.
The deconstruction and repurposing of temporary structures will take between five and seven years to complete after the Games. And in the legacy phase, more than three-quarters of the site will become a new neighbourhood.
Just under a quarter of the Barra site will be occupied by permanent sports facilities, which in legacy mode will provide elite training facilities for the Brazilian Olympic team as well as a sports high school for future Olympians.
AECOM delivered preliminary designs for six new sports venues: the new velodrome, Olympic Aquatics Stadium and Tennis Centre, as well as three adjoining Carioca Arenas that will host basketball, judo, taekwondo and wrestling competitions.
The velodrome will remain a cycling venue, the tennis centre will be adapted to host tournaments, and the Carioca Arenas will become a Sports Academy School and multi-sport training facility. The Olympic Aquatics Stadium will be rebuilt as two smaller community pools.
AECOM was also tasked with delivering the strategy for reusable, temporary structures that could be moved and rebuilt as community facilities and schools after the Games.
Venues including the Handball Arena and Olympic Aquatics Stadium employ efficient, highly standardised designs based on modular, stacked and repeated bolted steel structures to ease dismantling and reassembly. This “nomadic architecture” approach will allow the Handball Arena to be transformed after the Games into four new primary schools across the city.
AECOM also provided full architectural services for the International Broadcast Centre, which meets strict environmental and sustainability standards while also fulfilling broadcasters’ needs in terms of power and data connectivity, acoustics and temperature control.
The Olympic Park is designed for more than 150,000 spectators to move safely and freely on peak days during the Games. After the Games, the focus will switch to turning the site into parkland, with AECOM’s landscape design strategy transforming large spectator areas into a new linear park for the community.