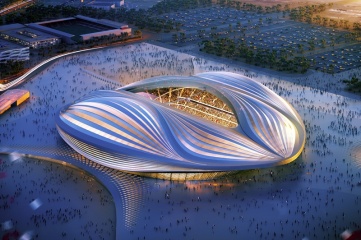 Four of the twelve stadiums planned for the Qatar 2022 World Cup might be dropped over the next five months, according to the Supreme Committee for Delivery and Legacy

The number of host cities and venues scheduled to host World Cup matches in 2022 is under review and may not be confirmed until September, a spokesperson for the Supreme Committee Delivery and Legacy told HOST CITY.

“In due course, the final proposal for stadia will be submitted to the FIFA Executive Committee for approval. The requirement is a minimum of eight and a maximum of 12 stadia,” the Supreme Committee for Delivery and Legacy said in a statement emailed to HOST CITY.

Qatar’s World Cup bid originally proposed an event with 12 venues encompassing all seven municipalities in Qatar. Four venues were planned for Doha, three for Al Rayyan and five for each of the other municipalities.

One possible outcome of the review would be to only use four venues in Doha, three in Al Rayyan and one in Al Wakrah – where the first new stadium is for the World Cup is already being built. This would mean that just three of Qatar’s seven municipalities could host World Cup matches.

“Once a country is chosen as host, a review of the bid plans is made with the organisers to propose the final host cities and stadia projects, which then need to be approved by the FIFA Executive Committee,” the Committee’s statement said.

“For Qatar, the process of selecting the final proposed line-up of host venues is ongoing.”

Asked when the venue selection would take place, the spokesperson said “It is logical to assume that the decision by the FIFA Executive Committee will occur after the 2014 FIFA World Cup in Brazil. In comparison, Russia’s Host City Selection occurred on 29 September 2012.”

Russia’s bid for the 2018 World Cup originally proposed 16 stadiums in 14 host cities, which was reduced to 12 stadiums in 11 cities.

The spokesperson declined to comment on what factors might influence a decision to reduce the number of host cities. Possible reasons include the time and investment required for venue construction, coupled with the scale of civic infrastructure work scheduled for Qatar over the next decade.

The need to safeguard legacy use for all World Cup stadiums after 2022 is also likely to influence the review.