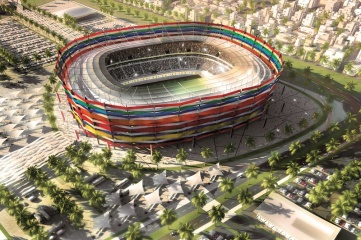 Al-Gharrafa Stadium will be expanded from 27,000 to 44,740 for the 2022 World Cup, with the addition of a facade representing qualifying nations

As Qatar’s preparations for the 2022 FIFA World Cup enter the construction phase, the World Stadium Congress brings architects, solutions providers and stadium operations consultants to Doha on 19th May 2014.

"We will draw from ASTAD's significant experience building sports facilities in Qatar, but it is also important for senior stakeholders within the industry to share their expertise and knowledge so that we may identify solutions to common challenges and ensure continuous improvement in design and construction."

Other speakers include Jon Sellins, head of business development consultancy at Wembley Stadium, who will draw from the Champions League Final 2013 to convey best practices in hosting and facilitating major sporting events.

Sustainability is the keyword at this year's conference. "It is important to us that the lasting impact of our stadiums on the community is a positive one," said Diogo Taddei, architecture manager at AECOM, Brazil.

"In designing the sporting and non-competition facilities for the Olympic and Paralympic Games in Rio de Janeiro, we took Rio's and Brazil's sporting ambitions into account and focused on the provision of a cost-efficient design for permanent and temporary venues. The legacy conversion plan cannot be overlooked."

"Given the number of stadiums that are being contemplated for the region, it is very important to discuss how we can ensure that these venues continue to benefit the community beyond the tournaments for which they were built," he said.

The congress will also feature panels, case studies and roundtable discussions. Meis, Taddei, Mark Fenwick of RFA Irribarren Architects, and Markus Pfisterer, director of GMP Architekten, will sit on a panel on trends in stadium design.

This year’s World Stadium Congress will host a financial perspective for the first time. Nermine Nassif Girgis Ishak, Head of Corporate Banking at Al Khaliji Commercial Bank will deliver a talk entitled "Financing growth and capitalising on development opportunities," an examination of opportunities in the Qatar projects market for local and international players.