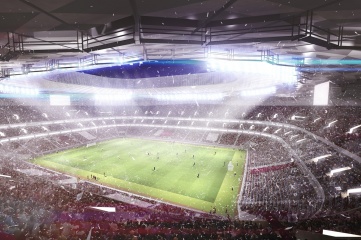 Meeting FIFA temperature requirements for the design of the Qatar Foundation Stadium, unveiled today, was a challenge for the lead architect

The organisers of the Qatar 2022 World Cup, unveiled the latest stadium design today, with details of the cooling technologies described by lead architect Mark Fenwick as a “challenge” to incorporate.

The Qatar Foundation Stadium is the fourth stadium design to be revealed by the Supreme Committee for Delivery & Legacy, who announced the plans on the anniversary of Qatar winning the right to host the 2022 FIFA World Cup.

The venue, based in Education City on the outskirts of Doha, will be combined with a Health and Wellness Precinct and educational programmes.

“Designing the Qatar Foundation Stadium was a unique challenge as it incorporates the innovative cooling technologies being developed by the Supreme Committee for Delivery & Legacy,” said Mark Fenwick, lead architect for RFA Fenwick Iribarren Architects.

According to the Supreme Committee, the design will create a comfortable environment for football. “Pitch and spectator terraces are cooled to the target temperatures; the players’ and spectators’ comfort levels will meet and exceed FIFA requirements and guidelines for safe play and spectating.”

The stadium is to be cooled using chilled water from the local air conditioning network combined with an innovative roof design.

The opening in the stadium roof is designed as a cavity, to act as a wind break and slow down the movement of hot air outside the roof. This process is passive and consumes no energy, helping to reduce the building’s overall energy consumption by reducing the amount of cool conditioned air escaping.

The active cooling system used by the stadium will take in chilled water from Education City’s existing district cooling network.

The high energy consumption of air conditioning will be further offset by photovoltaic and reflective technologies to produce energy for electricity and hot water. Photovoltaic and solar thermal panels are proposed to power the stadium, swimming pool and indoor pavilion.

According to the Supreme Committee, photovoltaic and solar thermal panels could be placed on the stadium roof.

The developers are aiming for a Gold Sustainability Building Certification in the US Building Council’s Leadership in Energy and Environmental Design (LEED) ratings system.

The construction is being managed by Qatar Foundation’s Capital Projects Directorate, which is setting its own standards in workers’ welfare, based on the Supreme Committee’s recommendations.

“With the exception of the early works contractor, who was awarded prior to the release of the QF Mandatory Standards of Migrant Workers’ Welfare (QF Standards), all contractors and sub-contractors working on this project will be contractually required to comply with the QF Standards,” says the Supreme Committee.

“Both sets of standards—which are based on Qatari labour law and international best practices—establish minimum requirements that protect the rights of workers from recruitment to repatriation.

“The SC and QF Standards are very similar and only differ in terms of the accommodation specifications.”

The stadium is scheduled for completion in 2018 with a capacity of 40,000 seats to host matches up to and including the quarter-final stage of the World Cup in 2022. The stadium will be reconfigured to 15,000 seats after the World Cup.

“Through innovative design, sustainably-sourced materials and the latest cooling and energy-efficient technology, the Qatar Foundation Stadium and Health & Wellness Precinct will not only allow us to host an amazing FIFA World Cup but also leave a genuine legacy in Qatar well beyond 2022,” said Ghanim Al Kuwari, Competition Venues Director at the Supreme Committee.