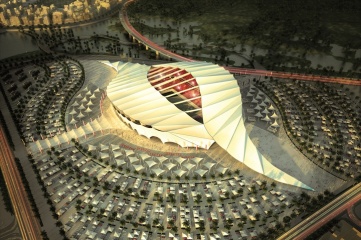 Work needs to begin in earnest on several Qatar World Cup stadiums, such as Al Khor

An unprecedented spending plan accounts for a rapid scale-up of infrastructure projects in Qatar, including World Cup stadiums

The Emir of Qatar has approved the country’s biggest ever national budget, with expenditure on infrastructure scheduled to rise faster this year.

An unprecedented total annual expenditure of US$60bn, based on projected national revenues of US$62bn, was endorsed on Sunday by Emir Sheikh Tamim bin Hamad Al Thani. The spending plan for the 2014-2015 fiscal year is up 3.7 per cent on the previous year.

The increase in expenditure is accounted for by a major ramp-up of infrastructure projects prioritised for national development, which include venues for the 2022 FIFA World Cup.

The Minister of Finance, His Excellency Ali Sharif Al Emadi, announced that US$24bn has been allocated for key projects. This figure, 16 per cent higher than the US$20bn set aside for such works in the previous fiscal year, represents a major step change in the pace of infrastructure work.

Al Emadi also stated that spending on key projects would reach US$182.35bn over the next five years.

The investment is necessary to start construction of new stadiums for the 2022 World Cup, with work set to begin on stadiums in Al Khor, Al Rayyan, Al Whakra, Khalifa and Lusail.

Other areas of development include education, health and transportation. Qatar’s new airport was originally due to open in December 2012 but is not expected to start operating until the middle of 2014.