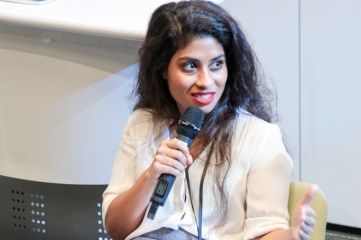 Soaad Islam, Associate at Populous explains how community pitches, stadia and cities can by temporarily transformed into world stages

Temporary event and infrastructure design is increasingly becoming recognised as the most cost effective and sustainable solution for organising committees and venue managers planning to host major international sporting events.

As temporary systems become increasingly sophisticated and trusted to provide world-class competition standards, the methods of integration and appropriate use are continuously evolving to match the complexity of the design ambition. The flexibility capacity added to a venue, and the embodied efficiency of a tailored business solution, can lead to year-round use and increased profitability. As a result, the potential for temporary works should be considered in the first stages of any event bid planning process.

From the outset of the design process, we consider the way in which the venue will be used in future phases at the very heart of the project. Event design in this way can be considered the first stage of construction.

The legacy strategy guides how the temporary venue begins to take its place on site. Certain services such as technology spaces and broadcast facilities can be embedded entirely into the permanent infrastructure, while other components such as seating bowls and ground works can be partially retained to maintain future expansion capabilities. Other areas are configured using components such as tents, canopies, cabins and fences that can be removed in their entirety, packed up and used at another event.

The first step in creating an appropriate design that perfectly suits the event is to consider all aspects of the character and spirit of the occasion, and to react to it with built forms that frame and enhance that character rather than imposing a design upon it. The result is designs which respond to the way in which the event is watched and experienced, and can help to enhance that feeling amongst the spectators.

At London 2012, loud music and constant cheering played a huge part in creating the atmosphere for a number of sports; in these venues we worked hard to bring the spectators as close to the action as possible so as to spur the athletes on.  By contrast, in other arenas silence was requested during the competition and applause came only on the completion of a performance. The explosive eruption of applause, within enclosed and intimate seating bowls following a tense silence, had a drama of its very own.

Of course, some sports had a completely unique character, such as the party nature of the beach volleyball tournament. At London 2012 and at Baku 2015, dancers would emerge between matches in cheerleader style and energise the audience. Though an elite sport was being played, putting on a spectacular show was also a key part of this event.

The careful layout of each constituent element of the functional areas, their juxtapositions and arrangements, enables efficient venue operations and easy orientation.

A critical aspect of operational design is knowing and understanding how to separate the public-facing areas from the back of house facilities. Security systems, crowd management planning and all-accessible integration are crucial to the staging of any event, but each must be designed to integrate as seamlessly as possible, to have the smallest visual impact.

The most challenging, yet rewarding piece of our work, is to understand and choreograph all the thousands of moving elements into one organised celebration of sport, without anyone noticing all of the work behind the scenes.

Naturally, different sports encourage different behaviors in spectator movement. From the arrival profile of fans, the frequency and method of occupying the spectator plazas, all the way through to the way they time their departure, successful temporary overlay design is all dependent on the nature of the event. In designing for and predicting spectator movements, we can collaborate with transport consultants early on in the process in order to use existing transport systems to their optimum level, and design to support it.

Although the same quality of experience is required in whichever location an event is being held, the way in which it is designed and operates can take on the flavour of its host country. In London 2012 the design of the Olympic Park areas were inspired by the theme of the English garden and street parties, with these iconic British community celebration motifs enlivening the spectator plazas. And as we saw recently in Rio, a carnival atmosphere influenced the entire Olympic and Paralympic event, informing all elements of the design and the event identity.

With the makeup and traditions of fans varying greatly across different sports, cultures and parts of the world, there is a fantastic opportunity for the host country to inject its own local flare, showcasing and making the most of local products, industry and youth programs.

With the unanimous approval of Olympic Agenda 2020 in 2014, it is clear that the Olympic Movement is fully behind the considered use of existing and temporary venues wherever possible, with the goal of reducing costs, improving sustainability and allowing the hosting of global events to become accessible to a greater number of nations and communities.

This design approach is becoming increasingly desired for events at all levels, and the opportunities that event and overlay design affords for regeneration, activation and innovative design can have a lasting influence on everyone who is drawn together around these spectacular occasions.