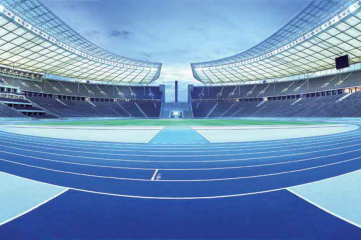 Granules made in Germany by Melos are being selected for top-level sports surfaces around the world, for a range of climatic conditions

The German company Melos GmbH is one of the world’s leading producers of coloured synthetic and EPDM rubber granules. Granules from Melos GmbH are used in particular in running tracks in sports stadiums, as fall protection surfaces for children’s playgrounds, as infill granules on artificial turf pitches as well as for non-slip surfacing at swimming pools.

Breaking records
Melos products have been used in many projects in recent years. The company’s portfolio includes both national and international installations, such as the running track at Berlin’s Olympic Stadium. The granule for this project was developed specially on request in the club colour of the German Bundesliga football + Hertha BSC Berlin, i.e. “Hertha Blue”. The track covers an area of approximately 9,200 m², of which around 5,250 m² is designed in the Hertha blue colour tone and adjacent areas of around 3,950 m² in grey. Around 40 tonnes of EPDM granules were used in the project.

Melos granules enabled a new world record for then 22-yearold Usain Bolt from Jamaica, who ran the announced world record in the 100 metres discipline on the blue track. His strongest rival, Tyson Gay, got the shock of his life at the 12th IAAF World Championships in Berlin’s Olympic Stadium when Usain Bolt not only set a world record for the 100 m but also for the 200 m. Recording times of 9.58 and 19.19 seconds respectively, the fastest man in the world outran the competition on the blue granules supplied by Melos.

Arabian light
In addition to high colour stability, enormous abrasion resistance and strong resistance to weathering, Melos granules also impress with their excellent resistance to UV light. These factors led to Melos granules being chosen for another major project in 2009, when the world’s longest circular horse racecourse, measuring 2,400 m, was constructed in Meydan City, a new district of Dubai.

Because of the considerable stress the horses endure during the race, it is all the more important that they receive special care beforehand and afterwards. For this reason, coloured EPDM granules from Melos were used to manufacture a floor covering fitted in a tunnel leading to the racecourse.

To reduce noise, granulated material from Melos was even applied to the tunnel walls and coloured surfaces constructed with Melos granules were installed as a pre-race warm-up area for the thoroughbreds. Adjacent tracks as well as grooming and wash areas for the valuable horses were equipped with the resilient non-slip Melos granules.

The medium-sized enterprise completed production and shipment of 500 tonnes of granules in just three months from the start of September to the end of November, with different grain sizes being mixed and then installed on site. This posed a real challenge, owing to the special requirement to supply a specially adapted blend of granule colours and properties. As well as a red granule for the outdoor surfaces, a blend made up of special shades of brown, beige and yellow was used for the tunnel and access passage to the arena.

The state of Qatar also uses Melos for its construction works. The world’s largest installed area of 175,000m² was installed on the “Emir Walkway” as a personal project of the Emir of Qatar. The Emir Walkway is a multi-purpose track that runs 9 km on both sides of a road at a width of 9.75 m on each side. Melos produced and supplied round about 1,000 tonnes of material for this project in a turnaround time of just eleven weeks. Similar to the tunnel leading to the Meydan race court, the walkway was also fitted with a colour blend of granules made up in this case of brown, eggshell and beige.

Cool head on hot days In addition to the many applications of the granules as floor covering, infill granules from Melos are used as a component of high-quality artificial turf systems for sports including football.

Melos launched a new granule on the market in 2011, Infill Cool Plus, with the motto “Cool head on hot days”. The new material is based on the proven EPDM material group, but with special components that reduce heat absorption.

FC Bayern Munich, the German football league championship record holder, opted for Infill Cool Plus in 2011. The Cool Plus effect, which encourages top performances by achieving low surface temperatures on hot summer days, convinced the football club to use the product in its modern training grounds.

The Cool Plus effect can be demonstrated in a direct comparison with different infill granules. In an experiment conducted with long-term exposure under laboratory conditions, the surface temperature was reduced by 25 per cent by using the light-green Melos Infill Cool Plus, compared with SBR rubber granules.

Long-term tests of Cool Plus – up to four hours of sunshine simulations in the irradiation chamber – also show reduced heat build-up and lower maximum temperature of the surface. This difference is palpable underfoot for the players and improves playing comfort considerably, as surface temperatures can reach up to 60°C in German summers.

The in-house laboratory at Melos works continuously to deliver product innovations. Melos recently launched a new product on the market: Infill Bionic Fibre, which provides an economically attractive and sustainable alternative to traditional granules on artificial turf pitches. In comparison with other granules on the market, Infill Bionic Fibre is characterised in particular by its fibrous, irregular and near-natural structure.

“Our new product is an especially resilient, durable, weatherproof, stable and near-natural infill material”, says Jörg Siekmann, Managing Director of Melos GmbH. “In addition, the material offers players a natural playing experience – almost like on natural turf. Pitch operators benefit from the low maintenance overhead and reduced use of resources.”

Melos is constantly researching improvements to its infill granules in its in-house laboratory. The focus here is on sport functionality: in addition to the recommendation of the German Football Association (DFB), sports associations and sports physicians also support the view that the use of modern artificial turf pitches protects joints and ensures a high quality of play. The infill granule plays an important role in this respect, offering distinct quality differences that can impact health and playing performance.

Jörg Siekmann says: “The soft and natural structure of “Infill Bionic Fibre” provides pleasant felling while running, gentler on the skin and increases natural playing performance. Even the DFB has commented positively on rubber-filled synthetic turf surfaces, stressing both the economic and sports-related functional benefits.

The company has its entire product range reviewed regularly by independent institutes and certified in accordance with current standards in the areas of environment, energy and sustainability. Strict attention is paid in production and development to optimal properties in terms of the environment, utilization and health.

The infill granules from Melos all feature basic properties such as weather resistance and durability. The quality of the products is reviewed on an ongoing basis and the granules are also ideally adapted with respect to human health and the environment. In terms of sportsrelated functional properties, such as traction and rotation, the players experience a playing performance that is comparable to a good natural grass pitch – but consistently stable under all climatic conditions.