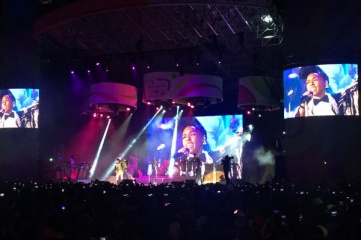 The PANAMANIA cultural festival continues through the Parapan American Games with star acts like Janelle Monae (Photo: TO2015 / Twitter)

Toronto’s sporting achievements continue with the Parapan American Games, which opened on Friday evening with the lighting of a cauldron at the new CIBC Pan Am/Parapan Am Athletics Stadium at York University.

“The Parapan Am Games are a jaw-dropping display of the power of human beings to excel, to overcome and to be strong,” said Mayor John Tory. “We are excited and ready to welcome athletes and visitors to our great city for these Games. Residents, visitors and a new generation of future athletes will be inspired. Toronto has already seen great triumphs with the Pan Am Games and we will see more with the Parapan Am Games.”

Toronto is hosting the largest ever Parapan Am Games, with more than 1,600 athletes from 28 countries compete in 15 sports at 11 different competition venues. The Parapan Am Games will officially begin when the cauldron is lit at this evening.

The 2015 Parapan American Games serve as a qualifier for the Rio 2016 Paralympic Games in all sports.

The new Toronto Pan Am Sports Centre (CIBC Pan Am Aquatics Centre and Field House) in Scarborough hosts the swimming and sitting volleyball events. After the Games, the facility will serve as a world-class water sports training centre as well as the home of the Wheelchair Basketball Canada National Academy.

Owned by the City of Toronto and the University of Toronto, the Toronto Pan Am Sports Centre will open to the community after the Parapan Am Games to provide health and recreation opportunities for Toronto residents and the local community.

The cultural celebration for the Games, PANAMANIA Live continues through the Parapan Am Games. Nathan Phillips Square is hosting free performances from some of the hottest names in Canadian and American popular music.

The City of Toronto is urging visitors and residents to make full use of the city’s public transit system, which it says has the second largest in North America and has the highest per capita ridership rate on the continent.

Toronto is Canada’s largest city and the fourth largest in North America. The city is said to be contemplating a bid for the 2024 or 2028 Olympic Games and the 2025 World Expo.