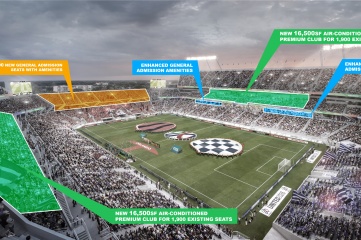 The stadium, one of nine used for the 1994 FIFA World Cup, is undergoing a transformation

[Source: Greater Orlando Sports Commission] Work has started at Orlando’s famous Camping World Stadium as the city reinforces its unique appeal as a venue for the 2026 FIFA World Cup™.

The $60m final phase of an ambitious “top to bottom” renovation costing $267m in total, places sports tourism at the forefront of the city’s post-Covid recovery plan. By the time it is finished the stadium will – in effect – have been completely re-built, with 90% all-new construction.

"Orlando has already established itself as one of the premier sports destinations in North America and enhancing Camping World Stadium only adds to our ability to host premier events," said Orlando Mayor Buddy Dyer. "I am proud that we've achieved exceptional value throughout the entire reconstruction. Our strategy has been validated by the lineup of marquee events scheduled for the stadium in the future."

The work is being carried out by Barton Malow, a Michigan-based construction firm and one of America’s largest private companies.

Jason Siegel, President & CEO of Greater Orlando Sports Commission said: “For the first time in the tournament’s history, the 2026 FIFA World Cup will feature 48 international teams, 16 more than any previous World Cup. This puts even greater emphasis on host city infrastructure as FIFA seeks to guarantee the quality of the matchday experience for soccer fans. The stadium upgrade is the final piece of the jigsaw, adding to Orlando’s reputation as a world leader in creating unforgettable moments for its millions of visitors every year.”

Orlando is America’s most visited destination, with 76 million incoming tourists a year; a significant proportion generated by the city’s highly effective promotion of its sporting credentials. Money from Orlando's Tourist Development Tax (TDT) or "bed tax" is funding the renovation. The TDT collected $284 million from visitors last fiscal year.

Allen Johnson, Chief Venues Officer of Orlando Venues, which operates the stadium, said: "I believe our value for money approach is the smart way forward because it recognizes FIFA's awareness of environmental and sustainability objectives. Camping World Stadium is proud to have received a LEED Silver certification from the US Green Building Council following its massive reconstruction in 2014 and we are committed to a greener future."

Orlando has a booming soccer infrastructure. It was one of the venues chosen to host matches for the 1994 FIFA World Cup when attendances averaged over 60,000 per match. It also hosted Olympic soccer matches for both the men’s and women’s competitions in 1996. Camping World Stadium has a 65,000-seat capacity (expandable) and its record attendance was 75,245 for WrestleMania 33 in 2017.

Camping World Stadium is welcoming back fans after a nine-month event hiatus. It went three-for-three for bowl games during a seven-day stretch from December 26 – January 1, winning the distinction of hosting the most bowl games at any stadium participating in the Football Bowl Subdivision. While simultaneously hosting a record number of bowl games, Orlando Venues stadium management also rolled out their health and safety game plan and safely welcomed back fans.

"Because it takes considerable effort to repeatedly 'flip' the stadium and have it game-ready in such a tight window, I'm proud of our team and partners who worked tirelessly to make the conversions seamless," said Allen Johnson.

With bowl week behind it, Camping World Stadium hosted the highest-profile off-road motorcycle racing championship in the world – the Monster Energy AMA Supercross FIM World Championship on February 13 and 20.