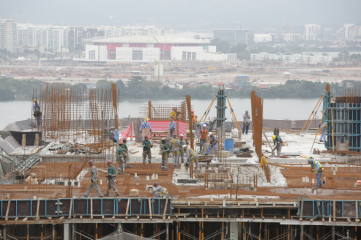 Construction of the Olympic Village, with Barra Olympic Park in the background (Photo: Rio 2016 / Cidade Olimpica)

The 2016 Olympic Games will not be affected by the economic slump or the scandal engulfing Brazil’s government and its national oil company, according to organising committee’s communications director Mario Andrada.

Construction projects for the Games, which takes place in Rio de Janeiro in August 2016, are back on track and will not be held up, despite the worrying prospect that some contractors may be linked to the scandal, Andrada said in an exclusive interview with HOST CITY.

He also said the state government needs to be mobilised to clean up the sailing venue in Guanabara Bay in time.

Brazil’s economy was booming when Rio de Janeiro was awarded the hosting rights in 2009 but the economy failed to grow in 2014 and remains depressed.

The country’s problems are compounded by the fact that several politicians and companies have been implicated in bribery issues relating to national oil producer, Petrobras.

“Brazil is going through a political and an economic crisis,” Andrada said.

“Petrobras has very complicated issues to manage. Some of the top Brazilian companies have been affected by this because they have been involved in corruption scandal.

“That’s worrying on our side because of the construction work on the Olympic Games.”

While the organising committee is not itself implicated in the scandal – “We are not connected to these allegations in any way, shape or form” – any contractors found to be connected to the Petrobras scandal will be taken off Olympic projects.

The organisers of the Games have prepared for this by ensuring that venue construction projects are contracted to more than one company.

“Each of the venues is being delivered by two or more construction companies. So if one of them is facing trouble through the Petrobras scandal due to lack of finance, the other companies are able to carry on.

“So far we have been able to be immune to this situation because the construction system guarantees that one of the companies hired for the job will do the job.”

Rio 2016 came under fire last year for a seriously delayed start to venue construction work but it is now on track.

“It’s not easy to sail through stormy waters, but we have been able to keep the pace,” said Andrada.

The International Olympic Committee’s coordination commission visited Rio de Janeiro in February and gave an overall positive assessment but identified areas of concern, such as the sailing venue.

“It was a very favourable visit but we have an issue in Guanabara Bay where the sailing competitions will take place,” said Andrada.

“We need to be more effective in cleaning the bay and helping the government to clean the bay.

“It’s a matter of mobilising the government. It’s a huge project that involves 12 counties around the bay, so it can only be carried out by the state government.

“The point is to help them to get technicians and experts to work together.”

The test event for sailing starts on 15th August 2015.

“We still have time to clean it up and to make sure the field of play will be totally clean. Everybody needs to push in the right direction.”

Construction work on the Olympic Park in Barra has made huge strides since the IOC voiced concerns a year ago, Andrada said, with the work clearly visible above ground.

“There is a huge amount of things to do but everything is moving in the way we want it to. We are cautiously optimistic but confident.”

Despite the economic slowdown, the organising committee is managing to operate with completely private finance.

“I believe the Games are the good news for Brazil in the middle of the Petrobras scandal and all the political issues.”

Mario Andrada was a VIP speaker at HOST CITY Bid to Win and is set to speak again at HOST CITY 2015: The Largest Meeting of Cities, Sports, Business and Cultural Events. Book your place now by contacting adam.soroka@cavendishgroup.co.uk