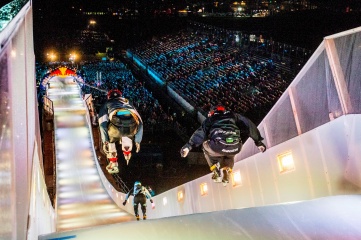 With the Freestyle and Crashed Ice events featuring action-packed trend sports, visitors get the full winter experience without having to travel to the mountains. Nussli explains how

The events attract sports fans, families, partygoers, and even people who don't like winter sports at all. Cities can usher in the winter early with enormous Big Air ramps and ice tracks made of temporary structures – even at temperatures way above zero.

The Olympic Park in Munich hosted the Ice Cross Downhill World Championship for the third time in January 2016. At 400m, the ice piste was the longest ever built. In addition, there was a height difference of 55m, challenging chicanes and obstacles – a real test of skill not just for the daring athletes but also for the builders of the ice channel.

Using system material, wooden ribs and planks, the NUSSLI project team built the substructure for the piste from the Olympic Mountain down to the Olympic Lake – but the track didn’t end there. 4,000 sq m of building area, the finish line, and the grandstands had to be constructed to stand in the water.

The team had already built the track in Lausanne two years ago, so they knew exactly what to pay attention to, in order to build the perfect ice channel. The most important thing for athletes – and therefore every track planner – is a track that is as smooth as possible.

To do this, the assembly team used bent wooden ribs that were cut precisely using a CNC (computer numeric control) machine, mounted on the track base, and then covered with wooden boards. This meticulous work, which was accurate to the inch, allowed the construction of a completely even run for high velocities.

A young sport with a fast-growing fan base

In winter 2001, daredevil athletes wearing ice skates raced down icy pistes in Stockholm for the very first time. Around hairpin bends, through steep passages, and over bumps, the ice skaters raced towards the finish line in groups of three or four along the run, which was up to 600 meters long.

Ever since, the event has offered the audience a great deal of action and an exciting spectacle. The athletes appear captivated by the thrill and the speed of this new type of sport, which is a combination of ice hockey, boardercross and inline downhill. The sport became so popular within such a short time that championships have been held annually since 2010.

Events such as Crashed Ice Championships that usually offer additional entertainment programs consisting of parties and shows are very popular and attract a mixed audience. Their temporary nature also holds a certain appeal, and their location in the middle of the city allows visitors to attend without long travel times.

By bringing the magic of winter into the city, host cities can project an image of dynamism, without the need to be dedicated to a single type of event or to make long-term investments in buildings.

The first event doesn’t necessarily have to include a 400 meter ice channel. Big Air ramps for snowboarders and freeskiers are constantly being built in cities at unusual locations.

The best athletes of the snowboard and freeski scene, as well as the best BMX and FMX riders, meet up year after year at the Freestyle on the Landiwiese in Zurich,. Against the backdrop of Lake Zurich and in a location easily accessible both by public and private transportation, the freestyle event presented the biggest names for the Big Air ramp and the BMX/FMX scene. Via a lift, athletes reached the starting point at the top of the structure made of system material.

Big Air is a fitting name for something with a height of 35 m and a length of 77 m. NUSSLI had previously built the very same structure in Graz for the Nokia FIS World Cup on the roof of an underground parking garage, on the Erasmus Bridge in Rotterdam, in the Palau Sant Jordi arena in Barcelona, at Tempelhof Airport in Berlin, at the Kniaz Aleksander/Batenberg Square in the centre of Sofia and at Battersea Power Station in London.

However, these already impressive dimensions will be surpassed at Mönchengladbach in Germany. A 49 m high and 120 m long ski jump will be installed by NUSSLI for the event in December. 800 cubic m of snow will be necessary to prepare the Big Air ramp.

130 of the best international snow sports athletes have already confirmed their participation. This event is their ticket to qualifying for the 2018 Winter Olympics in Pyeongchang, South Korea. Of course, the party zone will also be a part of the event, where four DJs will be working up the crowd to a fever pitch as the athletes make their jumps and flips.