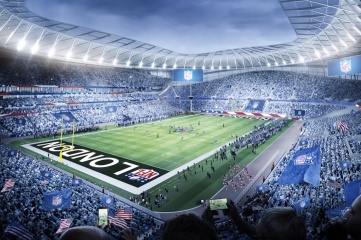 Tottenham Hotspur's new stadium partnership with the NFL has been described as a "visionary moment" by a director of the club.

With 61,559 seats, Spurs' new home will be largest capacity football club stadium in London and will feature a single-tier South Stand able to accommodate 17,500 spectators.

Expected to be complete for the beginning of the 2018-19 season, the multi-use stadium will include a fully retractable football pitch that can be replaced by a synthetic grass surface to be used for NFL games and other events.

The NFL signed a 10-year deal with the English Premier League club to use the stadium as its dedicated home for American football games in the UK.

Tottenham executive director Donna-Maria Cullen believes the NFL deal has improved standards in the design and technological aspects of the new facility.

Speaking at the Telegraph Business of Sport conference in London, Cullen said of the NFL partnership: "It was a visionary moment by Daniel [Levy, Tottenham chairman].

"One of the reasons we looked at the NFL was to create something different in Tottenham. You have to deliver more than a Premier League football club.

"The NFL will be a very different sport. But it has driven up standards in stadium. It's a whole new audience."

Construction of the new stadium means Tottenham will play their home games next season at Wembley.