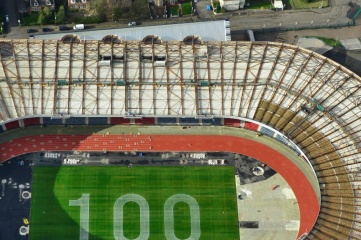 The Mondo track was laid earlier in the year; the company will now supply athletics equipment and be able to market itself as a sponsor

Hampden Park has been transformed into a world class athletics facility with a track from Mondo, who has now been confirmed as an official sponsor of the Games

The Organising Committee for the Glasgow 2014 Commonwealth Games announced the appointment of Mondo as the Official Provider of athletic track surface on Wednesday – after the company had already supplied the material for the athletics track surface.

“Not only has Mondo provided the track surface but they are now part of the Glasgow 2014 sponsor family,” a spokesperson for Glasgow 2014 told HOST CITY.

Mondo is also providing specialist sports equipment for the field of play.  “As a sponsor, Mondo has been granted exclusive rights to market and associate itself as a sponsor of the Games in connection with athletics sports equipment and track surface manufacture,” the spokesperson said.

The running track is the top layer of the major transformation that Hampden Park, Scotland’s national football stadium has undergone to become Glasgow 2014’s athletics venue.

A revolutionary solution has raised the stadium surface by almost two metres, gaining the width and length required for the athletics track. The track has been laid in sections, laying 20 sq m rolls one at a time. Around 14,000 sq m of pre-fabricated and pre-tested Mondo material has been laid inside Hampden Park.

Maurizio Stroppiana, Sport&Flooring General Manager at Mondo said “Glasgow has created a venue that is not only an engineering feat but a world-class example of environmental and social responsibility. Mondo is proud to be part of this achievement.”

A further 6,000sqm has been installed at Lesser Hampden, which will be the main warm-up area for athletes prior to competition.

David Grevemberg, Glasgow 2014 Chief Executive, said “The solution we’re implementing to transform Scotland’s National Stadium is a world-first on such a scale and it’s great to have the quality of track material supplied by Mondo providing a first-class platform for the best athletes of the Commonwealth to shine.”